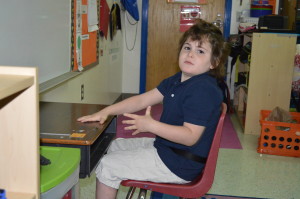 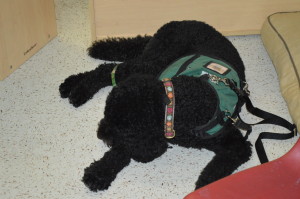 Tuesday was Gray’s first day of public school.  I came with him as part of my agreement with the district to spend 2 days in the classroom training the staff with Hope.  I felt a little nervous for things to go well after all the hoopla we had created with the district over allowing Hope to attend school with Gray.  I felt nervous about how Gray and Hope would perform in the new environment and I felt nervous about how we would be received by the other students and staff at the school.  I was warned that some portion of the staff would likely be angry over Hope’s presence at the school under the category of “different is bad.”

As we walked through the halls and made all of our transitions throughout the day, I was impressed with the calm and friendly way that everyone greeted us.  No one seemed upset and the teachers were very quick to remind the children not to touch Hope as we walked by.  I mentioned this to Gray’s teacher and she informed me that, at a staff meeting last week, the principal informed everyone about Hope coming to school.  He explained her duties and some of the rules associated with her presence.  Then, he told the staff that this was going to be the first service dog in all of Dallas Independent School District.  The teacher told me that the entire staff burst out in applause.  My heart melted a little bit.  I felt encouraged by the idea that this school was going to be a supportive place for Gray and Hope.  In fact, we went through the first day with relative ease.  Gray was in good spirits, for the most part, and seemed comfortable in his new classroom.  Hope performed like a complete professional and the teacher and classroom aide seemed confident in their training with her.

Of course, there were a few meltdowns.  Gray got upset in the lunchroom and on the playground.  I truly do not know what triggered his tantrums, except, I guess the “different is bad” category applies to him as well.  During his playground tantrum, he used his iPad to request a trip to the bathroom.  I complied and we tethered him to Hope for the trip back inside the building.  Gray wailed and cried as we walked across the grass.  There were other autism classes outside at the same time and I could see that Gray’s screaming was bothering a few of the students.  Just before we reached the building, a very large boy from the 3rd-5th grade class walked calmly up to Gray.  He did not speak or look alarmed.  I assume that he was coming to comfort Gray or just study him.  Suddenly, the kid raised his right arm and backhanded Gray across the face with such force that Gray was swept off his feet.  Then, the kid just turned and walked away.  All of the adults on the playground (including myself) just stood for a moment and blinked hard at the scene we had just witnessed.  Of course, there were many apologies and inquiries as to Gray’s status (he just continued his screaming on the ground – but with better reason now).

I’m actually glad that event happened in my presence.  In a strange way, it was a relief to have my kid be the victim instead of the aggressor for once.  Karma can be difficult sometimes.  Of course, I have made a request that Gray be kept away from that kid whenever he is upset.  This won’t be a difficult request to meet since the kid is in another class and grade.  And, in the end, Gray was fine.  We ended the day with a lovely P.E. class.  Gray’s teacher put orange cones around Hope so she wouldn’t get hit with any balls or tricycles in the gym.  I think the cones were probably more upsetting to her than the balls and the kids, but it made me very happy to see her considering Hope’s needs so early in our training.

Overall, Day 1 was a success.  Does it make me crazy to see a day where my kid gets pummeled as a good day?  Perhaps my perspective is a little off.