On March 24, 2014 by rhonigolden With 1 Comments - Uncategorized 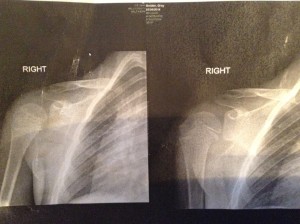 Thursday afternoon at 2:15pm, I received a call from Gray’s school.

It was actually the second call I had received that day. The first one came earlier in the morning when his teacher phoned to let me know that Gray had derailed her entire lesson plan with his iPad. She went on to explain that she had been working with some students when the song “Do you wanna build a snowman” from the movie, Frozen, started ringing through the classroom. Everyone stopped dead in their tracks and looked to see where the music was coming from. Gray was watching a video on his iPad that Zoe and Lena had made the night before.

Zoe has an app that allows her to take any songs that we own on iTunes and turn them into music videos with effects. Wednesday night, the girls had talked me into participating in their music video because, as they explained, Anna (the little sister in the movie) is 3 different ages throughout the song. Lena was playing the youngest version, then Zoe played the older one and they needed me to play the oldest version of Anna. I reluctantly obliged and followed all of their directions to “really show emotion” and “act out all of Anna’s words” for the camera. Best of all, they started my part off during the instrumental interlude, so the video has a long section where all that is shown is my backside as I stand in front of a door and wait for my cue. The girls thought it was great fun and I was just trying to be a fun-loving mom, but I didn’t consider who else might see the video. I certainly didn’t realize that it was on Gray’s iPad or that he knew where to find it. But, he did. And his whole class had a ball watching with him. Very embarassing.

So, when the second call came in at 2:15, I thought I was just going to take some more teasing over Gray’s non-stop viewing of the video. Imagine my surprise when the call was from Gray’s aide informing me that he had just dislocated his shoulder. He had been sitting in his chair with his feet crossed and leaned too far forward to get up. He lost his balance and caught his arm on a desk as he went to the ground. This caused his right shoulder to hyperextend and pop out of the socket. Sounds horrible, right? Well, his aide saw the whole thing and rushed over to get Gray. He said that he could tell the shoulder was dislocated as soon as he got to him. He tried to immobilize Gray’s arm while the classroom aide ran for the school nurse. Gray, seemingly unfazed by the whole thing didn’t even cry. He just let out a soft whimper and whipped his trunk around while his aide held his arm. This motion caused the shoulder to pop back into the socket and the whole situation was remedied by the time the nurse arrived. Gray has such a high pain tolerance, I suspect he only saw the event as an inconvenient moment when he couldn’t use his arm. I honestly think the only horrible part was for the aide who had to feel and hear all of the joint contortions happening in Gray’s body. By the time I got to the school, Gray was happy and moving his arm normally. The only evidence that any injury had happened was a red spot on top of his shoulder.

Of course, as a matter of safety, I took him to an orthopedic doctor to make sure that everything looked to be in its proper place. Ironically, Gray was the most calm and peaceful kid in my group. I nearly killed Zoe and Lena for goofing around and fighting throughout the entire appointment. Even while the doctor was talking to me and assuring me that everything looked fine, the girls were fighting over my phone and Gray’s iPad and who could climb on the exam table. I was furious and rattled by the time we left, but not because of Gray’s injury. It was because of the girls’ behavior and the fact that we were leaving the doctor’s office at 6pm and I had nothing prepared for dinner and everyone was starving. Funny, right? No one was was terribly upset or worried over Gray’s shoulder…not even Gray.

That’s how we roll in the Golden family. I wonder if it is that way for other families impacted by autism? Gray’s muscle tone is so low and his joints are so lax that I’m actually surprised he hasn’t dislocated more joints. Additionally, it seems that there is always some kind of medical emergency popping up for Gray. He has had stitches, glue and staples to mend cuts and gashes. Most days, he is sporting a bruise from some unknown source – either a fall or a self-inflicted punch or just running into things. Even when he had a full-blown seizure while we were on vacation in the Caribbean two years ago, we all just took it in stride. Of course Caribbean hospitals are much less beautiful than the resorts, but we were back on track 24-hours later. I remember a girlfriend asking me if I freaked out when Gray started with the convulsions. I replied, “No, not really. I knew what was happening. If one of the girls had a seizure, I would freak out. But, with Gray, there is always some new emergency cropping up.”

I don’t mean to sound callous towards my precious son, but the truth is, it is getting hard for him to shock me at this point. Even the girls could resume their normal bickering while we waited for Gray’s x-rays to come back. I credit him with a lot of my cool-headed handling of situations. It seems that many parents I know are way too overprotective of their kids. They worry about their kids playing outside with no shoes, eating too many sugary snacks, and signing up for plenty of extracurricular activities to keep them well-rounded. Not me. My low standards keep my sanity intact. I figure that a day without any visits to the emergency room is a good one.

On March 8, 2014 by rhonigolden With 0 Comments - Uncategorized 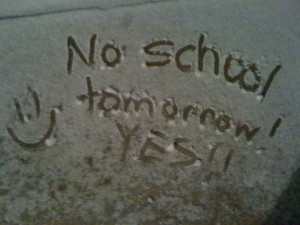 Sunday night, I received a text message from Lena’s school stating that it would be closed on Monday due to the weather.  I quickly jumped on the Dallas ISD page and discovered that school was cancelled for all of my children.  I gulped hard.  A small flutter of panic rose into my throat.  I have endured snow days in the past with everyone home and it wasn’t pretty or peaceful or restful, it was hell.

Two years ago, we had a terrible ice storm hit Dallas and the city shut down for almost a week.  Gray did not understand why we weren’t carrying on with our usual routines and stood at the door screaming.  When the girls got bundled up to go play outside, Gray ran to join them.  Of course, Gray was unable to tolerate a hat on his head or gloves on his hands, so playing outside proved even more frustrating than staying inside.  As his hands turned bright red in the cold, he just stood there and screamed while little frozen tears dried on his cheeks.  The only thing I could do to entertain him was to spin him in a chair or feed him goldfish crackers.  By the third day, Gray was beating his head against the doors and windows in pure frustration over cabin fever.  I would have felt sorry for him, but honestly, I was too busy feeling sorry for myself. I was willing to risk both my life and his by simply going out and driving around the city.  I lived in the Northeast for a few years and learned to drive on slippery roads, so I felt like I could handle it.  Of course, I couldn’t actually stop anywhere or patronize any open businesses because Gray would have been unmanageable and I could only imagine the carnage if he tried to elope and one of us slipped and fell during the chase.

Sunday night, as I felt that old familiar feeling of dread, I tried to reassure myself that things are different now.  I went to sleep praying that the roads would not completely glaze over and we could go out for a bit.  I recently read an article that admonished parents for complaining about snow days.  The author reminded adult readers about the thrilling feeling that kids get when school is unexpectedly cancelled and the negative message that we send our kids when we look disappointed about having to spend the day with them.  I resolved not to be that mom.  I awoke Monday morning to find Zoe standing in front of me with her school uniform.  She looked puzzled as to why I was still in bed at 7:30am.  When I told her that school was cancelled, her whole face lit up.  When I realized that Gray was sleeping late that morning, I thought that it was a good omen for a peaceful day ahead.  After a leisurely breakfast, I decided that we would venture out to accomplish a few errands.  The girls were so happy to have an unplanned day off that they eagerly agreed to whatever I wanted.

Thankfully, the roads were quite clear.  We made a few quick stops before heading into the craft store to replenish our supplies for the afternoon ahead.  I smiled to myself because I had a little flashback of the nightmare shopping trips that I reference in my post, entitled Shopping at Target, where Gray humiliated me when he pinched a man and threw his shoe at a woman.  I knew that today would be different.

While the girls were fluctuating between excitement and argument with each other, Gray was calm and happy.  The girls were jumping out of the car and slipping around in the parking lot, but Gray exited the vehicle quietly and steadied himself with Hope’s handle.  We entered the store in an orderly fashion and pulled a cart from the front.  While the girls ran around and fought over which crafts to buy, Gray walked calmly beside me and helped me push the cart.  He only grew agitated when we looped around our 10th aisle and showed no signs of leaving the store…but, I attribute that to general male shopping agitation.  I can’t imagine a typical 8-year-old boy tolerating a trip to the craft store as long as Gray did.

From the craft store, we headed to Central Market, a gourmet grocery store with samples galore.  Usually, I am on a mission at the grocery store with a long list and limited time.  But, today was a snow day.  THIS was our entertainment.  With time on our hands, we slowly meandered through the store and stopped every time we saw a sample that appealed to us or an item that we wanted to try at home.  Gray got equal billing in the choice-making.  Through his iPad and pointing, we made as many stops per his requests as we did for anyone else’s.  The result?  $100 worth of novelty groceries, 2 hours killed, lunch-via-samples and no melt-downs.

Arriving back home at 3pm, I felt very pleased with the day.  Everyone had a good time, including me. It was the first snow day that I have enjoyed since I was a kid.  But, then again, life is pretty enjoyable overall these days.