How to Have an Easy Thanksgiving Day

On December 6, 2013 by rhonigolden With 1 Comments - Uncategorized

Unfortunately, as Gray has gotten older, he has become more and more difficult to manage in a jogging stroller. Let me first say that the jogging stroller was, for many years, the happiest place in the world for Gray.  Even now, I find him sneaking into the garage and climbing into the stroller and just sitting there in the dark chewing on the seat belt straps. But, each year, complications arose that made it harder and harder to keep Gray and Barry happy. I think it was 3 or 4 years ago when we had a cold snap on Thanksgiving morning. It was just about 45-50 degrees that morning, so it didn’t seem like a big problem sending the boys out for the run. I just bundled Gray up with thick pants, socks, shoes and a blanket. He wouldn’t wear gloves back then (actually, he probably won’t now either), but I just told Barry to tuck the blanket tightly around him.

I think that may have been the hardest 8 miles that Barry ever attempted to traverse. Let me lay out the course for you. In years past, everyone starts the race at the same time and runs the same course for the first couple of miles. There are bands that play along the route and the crowd is quite thick. Just before the 3-mile marker, the course split and the 5K racers would turn back towards the finish line while the 8 mile racers peeled off to complete their remaining 5 miles. At that point, the crowd got dramatically thinner and the bands were much less exciting. I guess the entertainment value of the race wore off for Gray at that point and he needed to do something else to amuse himself. About a mile after the split, another runner caught up to Barry and handed him a shoe. Barry looked to down to see that Gray had removed his shoes and socks. Neither the socks nor the other shoe were anywhere in sight. Four miles down. Four to go. Turning back was not really an option as the course was winding through downtown and over closed highways. Barry decided to pick up the pace a bit. Within 10 minutes, Gray was screaming and thrashing in the stroller. He had the blanket wadded up beneath his legs and he was chewing on a corner leaving it soaking wet. As a result, the front of his shirt was wet as well. His uncovered hands and feet were bright red. Although, Barry stopped several times to readjust the blanket over Gray’s squirmy body, Gray wouldn’t keep it in place for more that a minute or two. Five miles down. Three to go.  Barry picked up the pace again. The last 30 minutes of the race went something like this:

(Gray screaming and thrashing in the stroller.)

Well meaning runner: “Excuse me, but I think your son is upset because his feet are cold.”

Well meaning runner: “You know it’s pretty cold out here. I bet it’s windy in that stroller. You should put some shoes on him and cover him up.”

As the years have progressed, Gray has gotten taller and fitting him in a traditional jogging stroller has become even more challenging. As Gray’s legs lengthened, he learned to take great joy in dipping his foot into the front wheel causing the whole stroller to come to a halt. This, in turn, would cause Barry to impale himself with the stroller handle. As Gray’s reach grew longer, his sneaky little hands would snake their way up the back of his seat and onto the the push handles where he would find Barry’s iPod and headphone cord. A quick jerk could easily rip the ear buds right out of Barry’s ears while Gray squealed and bounced in delight. Needless to say, Barry’s patience started wearing thin. 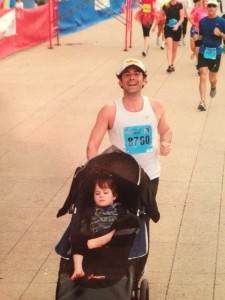 So, last year, we decided to purchase a jogging stroller for adults with special needs. The length was long enough to ensure that Gray could not pull any of his old tricks. The stroller arrived just before Thanksgiving and my parents graciously offered to prepare the turkey, so our entire family was free to participate in the Turkey Trot together. The weather was favorable, and we loaded up our new stroller for Gray and our old stroller for Lena and headed out for the race. I took the girls for the 5K race and Barry took Gray for the 8 miler. Things went beautifully for us girls and we waited at the finish line for Barry and Gray. As time ticked past, I grew concerned.  When they finally chugged into view, I could tell by the look on Barry’s face that things had not gone smoothly.  Two miles before the end of the race, the front wheel of the new stroller popped off sending Barry and Gray tumbling down. Fortunately, a new well meaning runner stopped to assist them.

All this aside, we planned to attend the race again this year. That is, until we awoke on Thursday morning to find the temperature in the 30’s. Laying there in our cozy bed and considering the temperature outside, I’m certain that the exact same images flashed through both of our minds: waiting in the cold for the race to start, red cheeks and ears, whining and moaning about the wind, and all of the unknown calamities ahead. We quickly agreed to skip the race this year and turned on some cartoons for the kids while we burrowed in the covers. 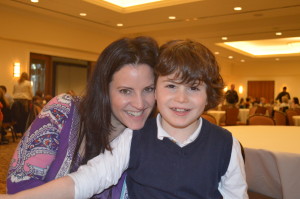 When I was a kid in my parents’ house, my mom always insisted on setting the table the night before Thanksgiving.  We would pull out all of her best china and crystal and we would carefully lay a giant sheet over the whole table so it wouldn’t get dusty overnight. I laugh when I imagine a delicately-set table with a big sheet over it in my house. I’m fairly certain that there wouldn’t be one glass or plate intact by the time dinner was served. Additionally, putting on a Thanksgiving feast requires many hours of food preparation for at least 24 hours before the big event. Each year, I anxiously anticipate how Gray’s mood may or may not allow me to stand in the kitchen and prepare food with sharp knives and a hot oven and stove. This year, I luxuriated in the clean untouched kitchen and standard evening activities that took place on Wednesday night.

3.  Go out for Thanksgiving Lunch 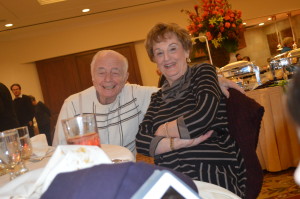 For the first time ever, we all decided to go out for our meal. Honestly, now that we have Hope, it is easier to go out to eat than to stay at home. At home, Gray still can have a hard time sitting at the table for a meal. On his home turf, he feels entitled to roam about and cause destruction. He is actually offended and upset if someone tries to make him sit still for more than 15 minutes.

Also, my kids are a lot like me. I like being around lots of people; especially on big holidays. For many reasons, that just isn’t a possibility in our house. By going out, we were guaranteed to be part of a festive environment with other like-minded families. It felt social and lively. Plus, the food was way better than anything I would have prepared. At least, the variety was way better. Just cite to the “Friends” episode when Monica had to make 5 different types of stuffing to satisfy everyone. It’s hard to be the lone cook and make everyone happy. The big buffet was brimming with lots of choices so everyone at my table was happy with their plate. 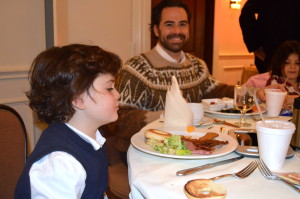 Walking up to our table, I felt a little concerned. Last year, our only option for Thanksgiving was to stay home with my parents as our only guests. The idea of going out in public to a nice restaurant wearing nice clothes and expecting to eat a leisurely meal would have been terrifying. It’s unbelievable to consider the change that Hope has brought in our ability to eat out. Still, this was our first venture into “fine dining.” I can only say that the day could not have gone more smoothly. We spent 2 1/2 hours on our leisurely and decadent meal. I was not strapped to the table at the mercy of other people to bring me a plate. Gray and Hope walked with me as we cruised the buffet for our favorite dishes. Gray didn’t even try to get up from his seat when I took myself to the buffet. At various intervals, we walked around, looked out the windows and greeted other guests. By the time dessert was over, Gray grew tired of his chair and just climbed into my lap. It was peaceful and lovely and I didn’t have to wash even one load of dishes.

4.  Spend the Afternoon Outside 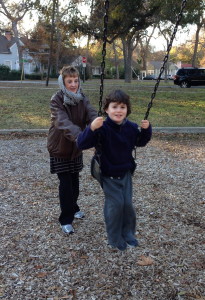 After lunch, we returned home and deposited Barry and my father on the couch to watch football. They were both asleep within 15 minutes. My mom and I loaded up the kids and headed to the park with Hope. The temperature had warmed up and we just needed light jackets. My mom pushed Gray on the swings while Zoe walked Hope on the path around the playground and Lena introduced herself to other kids. I took that moment to stop and breathe in the day. I was not frantic from an embarrassing scene, and I was not exhausted from trying to host the perfect day. I was happy and so was everyone else in my family. Life felt easy. What more could I ask for?