On September 19, 2013 by rhonigolden With 3 Comments - Uncategorized 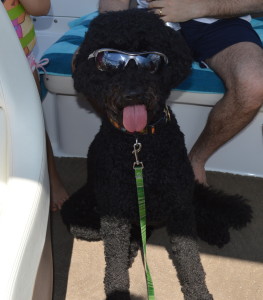 The last time that we took a family road trip and stayed with friends, was two years ago.  We drove to Austin to stay with one of my closest friends from childhood and her family.  Although the weekend went fairly well, in my opinion, my friend couldn’t help but remark about how difficult our lives looked.  “You don’t get any down time, do you?”  I remember that question vividly because it made such an impression on me.  I remember thinking that she was right.  The only time I had for “down time” was when Gray was under the care of someone else.  Otherwise, it was non-stop movement and monitoring to make sure that he didn’t destroy things or go missing.  To cap it all off, we ended that weekend with a trip to the emergency room.

On Sunday morning, as were finishing breakfast and packing up to go, Gray fell on the stairs and sliced his chin open on the bottom of the railing.  At first I didn’t realize how badly he was hurt because it didn’t bleed very much.  The only notable thing about the fall was that, after crying and getting up, he ran to me and threw himself in my arms.  He had never done that before.  I think that is fairly common among kids who have autism: they don’t seek comfort from other people.  I remember feeling encouraged that he had come to me for comfort.  It wasn’t until a few minutes later that I realized how bad the injury was and that he was going to require stitches.  That made me consider the idea that perhaps children with autism don’t seek comfort as much because they don’t feel pain as easily.  Gray has an unusually high pain tolerance.  He can punch himself in the legs until they bruise, he can bite his arm until it bleeds and he can smash his head into a wall until his forehead splits open.  I guess it only makes sense that it would take an emergency-room-worthy injury to be painful enough for him to seek comfort from me. 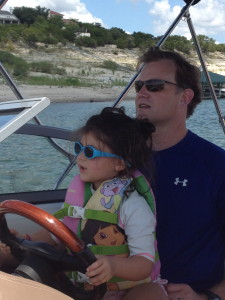 To make a long story short, instead of leaving at noon on that Sunday, we left around 6pm.  I spent the day in the hospital with Gray while Barry and the girls stayed back at my friends house.  Needless to say, we went to bed Sunday night feeling drained from our weekend instead of rejuvenated by the little getaway.  I’m certain that my friend and her family felt the same way.

Of course, now that we have Hope and I have been documenting all of our success stories, our appeal as house guests has returned.  After our successful trips over the summer, I felt confident in accepting the invitation that my friend extended for us to come try again. 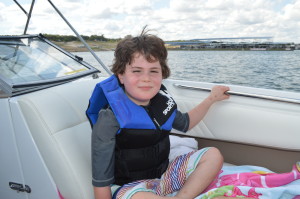 In a nutshell, the weekend was a smashing success.

After an uneventful 3 1/2-hour drive, we arrived around 7:30.  Lena and Zoe flew out of the car to play with the other kids.  Gray had fallen asleep, but woke up while we were unloading and happily joined everyone in the house.  At first, Gray just sat at the table with the grown-ups while we chatted and the kids played upstairs.  I told my friend that the goal for the weekend was to “achieve down-time”.  I was feeling optimistic because Gray has been on the low end of the energy/mania spectrum these days.  After about 20 minutes of listening to the other 4 kids screaming and playing above us, Gray jumped up and headed up the stairs to join them.  I followed to see what kind of destruction he might have in mind. 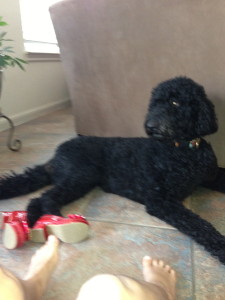 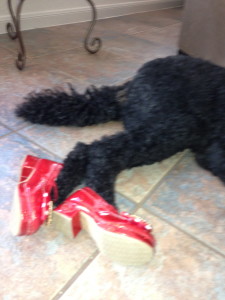 Because Gray doesn’t really know how to play with other kids, he often just picks up on the energy in the room and will get revved up by the activity around him.  This can look like jumping, squealing, pulling kids’ hair, pinching, or having a bathroom accident.  Generally, Lena and Zoe can roll with this and help Gray engage in a more appropriate fashion or, at a minimum, they won’t be too distressed if they get assaulted.  I couldn’t count on their help with 2 new friends to play with, though.  Like a spy, I crept up the stairs and stayed about 20 feet behind Gray so he wouldn’t notice I was tailing him.  I peeked around the corner to the playroom and saw that the older kids were engaged in a full-on wrestling match while the younger two sat nearby on the floor playing with dolls.  Gray was just standing in the middle of the room with a big smile on his face.  I waited.  That big smile usually means trouble is brewing.  But, to my surprise, he eventually just went to sit down on the couch and watch the other kids playing.  He was still smiling, but it looked more like the expression of someone who is enjoying a movie rather than a serial killer observing his next victim.

I went back downstairs feeling somewhat comfortable that I could re-join the grown-ups with little worry.  For any other autism parents out there, I suspect that you can understand how huge a moment this was.  First, to see Gray showing interest and pleasure in watching other kids play was a pretty big deal. Most kids with autism just tune-out other children.  That’s part of why their social skill are so poor.  I have to think that being a spectator in the stands is almost as good playing the sport, right?  At least it’s a start.  Second, I have long fantasized about being one of those moms who can sit and chat with other parents while our kids play. For any parents who only have typical children, you have no idea about the luxury you possess. Most families can accept last minute invitations to spend an afternoon or evening at another family’s house.  The grown-ups get down-time while the kids wear themselves out.  It’s a win-win for all parties.  Most moms and dads can relax in these settings secure in the knowledge that their children will behave, more or less. That has never been my life.  I will accept those invitations when I can for the sake of Zoe and Lena, but I always know that I will spend my time following Gray around and preventing disasters.  This night felt like a dream come true.  It felt like…DOWN TIME! 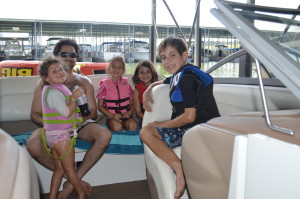 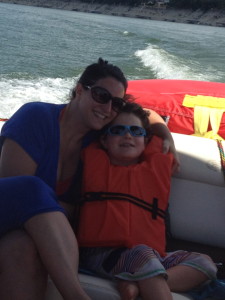 When we finally decided to get the kids to bed, I tried to get Gray down first.  He is usually pretty easy to get to sleep in any setting because he works much more off of internal cues than external ones.  I knew he was tired and I figured that, if I just went through his normal bedtime ritual, he would understand that he needed to go to sleep.  While he was cooperative with the bedtime process and even lay in the bed without protest, he did not stay in the bed when I moved to leave the room.  This surprised me.  He just followed me out of the door.  When I told him that it was time for night night, he just looked at me and shook his head.  I led him back in the room and laid down next to him in the bed.  Within minutes, he was sound asleep.

I came out to find the others getting ready for bed.  I commented to my friend how I thought it was weird that he needed me with him before he fell asleep.  To her, the reason was obvious: a kid in a strange place can have a hard time going to bed. Honestly, the thought never occurred to me.  The more I thought about it, though, the more I knew she was right.  This was another huge moment.  At that moment, I put together what this evening meant: Gray was paying attention to his environment.  Huge. Could it be that all of this community training with Hope was actually translating into other areas?  It’s not such a crazy thought.  Hope has taught Gray to slow down and observe his surroundings.  She gives him comfort in being where he is supposed to be in the community and, I believe, this has helped him calm down overall.  It only makes sense to think that this “therapy,” like all of his other therapies, is beginning to carry over to all aspects of his life. 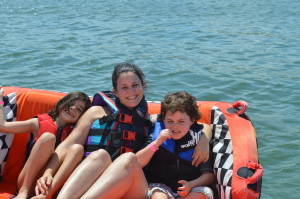 The next day was equally calm and pleasant.  After a leisurely breakfast, our friends offered to take us out on their boat.  After our initial success with Kati and her family on the river in Oregon, I felt very confident as we headed out to the lake.  We spent six hours out on the lake.  My friend’s husband proved to be an excellent captain and expert inner-tube pilot.  All the kids took turns riding on the inner-tube behind the boat.  Then, we threw down anchor at a little beach and everyone got out to swim — including Hope.  She looked so funny paddling in the water, but when she reached the beach, she found 2 other dogs ready to play.  While Hope ran in and out of the water, Gray enjoyed the squishy mud under his feet and feeling the sandy dirt in his hands.  Of course, when he spotted other people on the beach with a picnic, he tried to make a break for them to score snacks, but he was easily redirected when I went after him.  After swimming, we loaded back up on the boat and cruised over to a floating restaurant.  Barry was amused by a “no animals” sign on the front of the restaurant.  We were all a little tense that we might be in for an argument regarding Hope’s right to join us, but no one even gave us a second glance.  We sat, we ate, we fed our leftovers to a mob of catfish.  It was easy.  The whole day was easy.

We loaded up on Sunday to head over to another friend’s house for lunch and swimming.  By this point, I was feeling downright smug.  On the drive back to Dallas, Zoe said, “This was the best weekend ever!  This was much more fun than any big expensive vacation in the Caribbean.  I bet we could afford 10 more trips like this for the price of 1 big vacation.  Can we start doing this instead, Mom?” 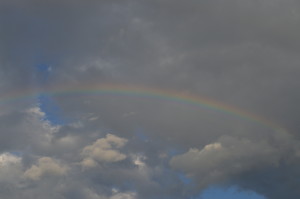 This showed up when we got home from our boat trip. True story.

Maybe we can, Zoe.  We are a traveling bunch.  Out of town friends: get your guest rooms ready.