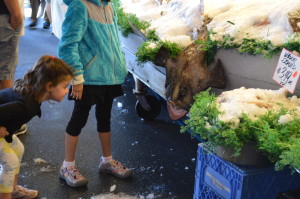 The trip to Seattle was nothing short of remarkable.  Because of Hope, we were able to have a normal family vacation.  Saturday morning, we ate breakfast in the restaurant before we walked down to the Pikes Place market.  We ambled along the booths for quite a while until Zoe and Lena caught sight of the ferris wheel by the water.  After buying a few trinkets, we wandered down various paths until we found ourselves in front of the ferris wheel.  Although the sign stated that service animals were allowed on the ride, my general anxiety over heights made it too much for me to imagine bringing her.  Barry volunteered to stay on the pier with Hope while I took all 3 kids in the ferris wheel.  Even though Hope did not join us on our ride, I was grateful for the tether belt around Gray’s waist that usually attaches to her.  Throughout the ride, I kept a tight grip on that belt to ensure Gray did not bounce around as we soared high above the city. 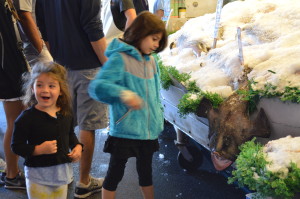 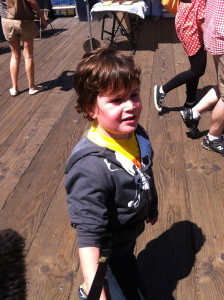 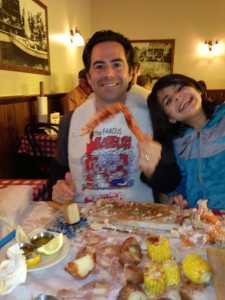 For lunch, we chose a seafood restaurant that looked good to Barry and ate a grand crab-cracking lunch while we looked out over the water.  On the way to lunch, we had spotted an arcade complete with an indoor carousel.  As a reward for good eating, we took the kids back to the arcade and finished out our afternoon there with the girls playing video games and Gray riding the carousel.  Gray could not wipe the grin off of his face while he rode the world’s fastest carousel.  Hope was a good sport.  She lay under Gray’s bobbing horse and tolerated the spinning without complaint.  By that time, it was 3pm and we decided to head back to the room for a rest. 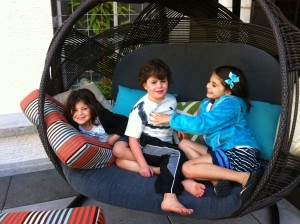 This would be a good place for me to take a little break from the sunshine story.  I gave the abbreviated happy version of our morning above because that is how I saw it: remarkable and happy.  But, to be fair to you readers, I think I should add in a few details to make the picture a little clearer.  Regardless of how great Hope is, Gray still has autism.  In the morning at breakfast, Gray had a little meltdown because the only tables left were high bar-style tables with stools.  That was a difficult setup for him resulting in quite a bit of wailing, so I ended up just walking him around the hallways and to the bathroom while Barry and the girls ate their breakfast.  Fortunately, there was a swinging love seat on the rooftop patio so the kids had a great time with Barry pushing them while I ate a quick breakfast of my own.  At the marketplace, Gray was easily irritated whenever we would stop to look at a booth.  Barry and I had to take turns walking with Gray and Hope to allow everyone a chance to look at the things that interested them.  When we returned to our hotel room for a rest/nap break, Gray was a little wired (manic, you might say).  I took one for the team by letting Barry and the girls nap while I wrestled with Gray and took him around the lobby to prevent him from disturbing them.

My point is that, although traveling with Gray has real challenges, they are minor in the scheme of things because of Hope.  On the way back from the ferris wheel, we had to cross a busy street.  Gray apparently recognized something across the street and decided to run for it before the light had changed.  I was distracted by something that Lena said and, before I knew it, I felt a sharp tug on Hope’s tether.  That was the difference between Gray running into traffic and staying safely on the sidewalk with the rest of us.  At one point, over the weekend, someone that I was chatting with at the hotel asked me if having Hope had made a difference in our family’s ability to travel.  I just chuckled and told her that having Hope was the ONLY way we were able to travel.  Considering the fact that we couldn’t even go to a mall or a street festival without a major tantrum or escape attempt, there is no chance that we could have braved the airport, the country’s most popular farmers market, and even a baseball game without Hope. 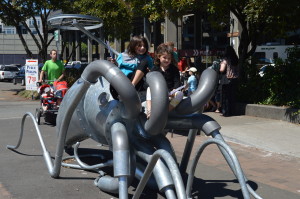 Yes.  We ended our very busy day with a visit to Safeco Field to see the Mariners play the Angels.  Barry is a baseball fanatic and the whole reason we added Seattle onto our trip was because he wanted to see a major league game in a different stadium.  The game was great.  The Mariners trampled the Angels (very good for Texas Rangers fans), we had really nice seats, and the kids had a ball (no pun intended).  One perk of having a kid that needs a service dog: ushers at major league ball games make you feel extra special and give your kids all kinds of free memorabilia like baseball cards and signed baseballs!

Although traveling with Gray can be exhausting, don’t all parents feel that way about traveling with their children?  That’s all I ask for.  I just want to be equally exhausted as other parents.  That’s what a summer vacation is all about, right?