The 4th of July

On July 8, 2013 by rhonigolden With 0 Comments - Uncategorized

The 4th of July is one of my favorite holidays second only to Thanksgiving.  I love it because everyone can celebrate it together regardless of religion or cultural background.  It feels like an amazing day of community bonding with an acute focus on children.  In my neighborhood, the holiday runs in the same traditions every year.  In the morning, there is a big parade down the main street of our neighborhood with all of the residents of that street throwing their own front lawn breakfast parties.  We always go to my friend’s house as she has the perfect yard for catching candy and beads that are thrown from the homemade floats that go by.  I have many many happy memories of Independence Days past.  All of my babies have sat on that porch to watch the parade and all of my toddlers have stood in the street to catch the trinkets as they shower down.

Unfortunately, about 3 years ago, we had to start leaving Gray at home with a babysitter while the rest of us went to the parade.  The last time Gray went to the parade was 4 years ago when I was still in the hospital after delivering Lena.  Barry and a babysitter took Zoe and Gray to the parade. The babysitter spent the whole time following Gray around trying to keep him from running off into the crowd and scooping him up from where he lay on the sidewalk throwing a fit because he couldn’t run away.  It was an exhausting time for everyone.

This year, because of Hope, I felt brave enough to try again.  When we got to the parade party, Gray walked nicely with us across the street and into the house.  He waited patiently while we said hello to everyone and gathered some snacks before the parade began.  We found a spot on the lawn to sit and wait and Gray climbed into my lap with Hope beside me.  Unfortunately, it was only a few minutes before Gray used his iPad to tell me that he was ready to go home.  I told him we were waiting for the parade and he got upset.  Because of Hope, I was calmly able to gather him up and we took a walk down the street to look for the first floats that hadn’t made it down our way yet.  As long as we were walking, he was happy.  We returned back to the house after about 20 minutes and Gray tolerated 10 more minutes of parade watching on the front lawn.  After that, we went inside.  He immediately tried to run around my friend’s house looking for trouble, but his tether to Hope kept him from getting far.  Eventually, we were able to sit at the table and have snacks.  When Barry and Lena came back in the house, Gray curled up on Barry’s lap and fell asleep.  It wasn’t a perfect experience, but it was worlds better than years past. 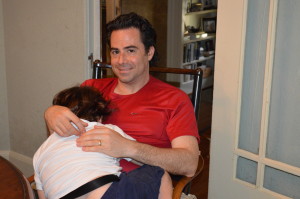 In the evening, we made a plan to go to the country club to swim and eat dinner before the fireworks began.  This would be Gray’s first experience with fireworks.  It should be easy to understand why I did not feel comfortable taking him in previous years.  The concerns I had about him running away in broad daylight were only multiplied when I considered pitch black, hundreds of people and fire shooting up into the sky.  But, once again, Hope’s presence gave me the confidence to try it this year.  Just for extra insurance, we brought along one of Gray’s therapists and had an extra car in case he just couldn’t stay.  I made a social story on Gray’s iPad explaining how the fireworks would go.  It is only recently, that Gray has had any interest in social stories.  I am so impressed by his recent improvement in this area.  It makes worlds of difference when he can be prepared for an upcoming situation and the behavioral expectations that we will have for him.  Thankfully, the “Stories2Learn” app on the iPad makes the writing of these stories incredibly easy.  We read the story a few times before we headed up to the pool.  I told him how we would sit on a blanket and wait for the fireworks to begin.  I told him how the fireworks would be loud and colorful.  It worked like a charm.  When the time came to move out to our seats on the golf course, Gray and Hope walked nicely and took their place on the blanket beside me.

I could not believe how patiently Gray sat while waiting half an hour for the fireworks to begin.  We went through the social story a few more times.  Then, the big moment arrived.  The first explosion went up and the sky filled with light.  Hope was not a fan.  She stood up and tried to move away from the scene in front of us.  I pulled out a stash of hot dog pieces and popped them in her mouth while settling her back down with some deep pressure.  I sat her between my knees so I could keep the deep pressure and hot dogs going.  Barry joked that I would soon be riding her down the hill like a horse.  On the other end of the spectrum was Gray.  He stared up at the sky with a wide grin on his face.  The wonder and pleasure in his eyes nearly brought me to tears.  I felt so happy to let him experience something that made him so happy.  As we walked out to our car among the dense crowd of people, Gray strolled calmly alongside Hope with a sweet grin on his face.  It was an amazing night. 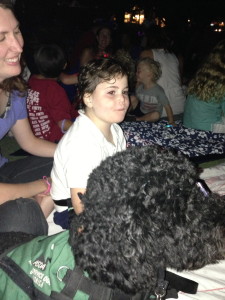 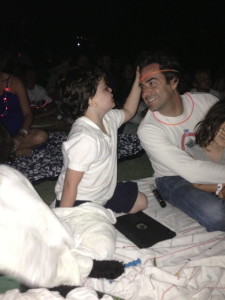 The glow sticks helped with the wait 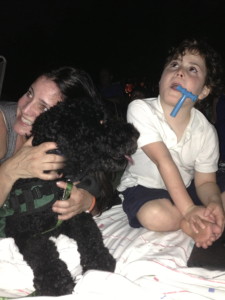