The State Fair of Texas

On October 17, 2013 by rhonigolden With 8 Comments - Uncategorized

Last Sunday, the weather was beautiful.  I spent the whole weekend looking for ways to be outside.  On a whim, I decided that we should take the kids to the fair for a few hours.  The fair is close to our house, we had no other plans, why not just make an impromptu trip?

Well, last year, I would have told you that the very idea of taking Gray to the fair was utter madness.  There would have been no way on the planet that anyone could convince me that it would be at all fun.  I know that, at a minimum, I would have a screaming flailing child that I would have to scoop up off of the ground in a crowded walkway or animal exhibit.  There would have also been the very real possibility of just losing him in the crowd.  I could envision myself in front of the reporters trying to explain what would possess a mother to take a child such as mine to a place such as the fair — all while a search team scoured the area.  No thank you.  The fair did not happen last year.

But, this year was dramatically different.  The fair just sounded like a good way to kill a few hours on a Sunday afternoon.  It wasn’t until we got to the fair and started looking for parking that I really realized how amazing it was to be there with Gray.  It almost didn’t cross my mind that this was something to appreciate.  THAT is how our life feels now: Much closer to normal than I ever dreamed possible.

Truthfully, I don’t even have anything that interesting to say about last Sunday except that we went to the fair, we ate some fried food, we watched a pig 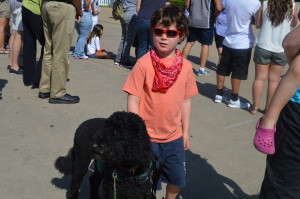 race and the kids got whiny after about 3 hours, so we left.  It was so easy that, when Zoe and Gray had the day off of school on Friday, I made another last-minute decision to take them to the fair for another 3-hour go ’round.

Our second trip was equally pleasant.  As we walked around, we stopped so that Zoe could go on the bigger rides.  I figured that we would make our way over to the kiddie rides so that Gray could enjoy some as well.  Even though he seems like a thrill seeker, I felt nervous putting him on rides that were meant for kids his age.  I explained to Zoe that I was concerned that if Gray got upset or tried to get out of his seat, she would not be big enough to control him.  Of course, I was not going to go on any bigger riders with him.  I needed to stay with Hope and my post-40-year-old vestibular system couldn’t take it anyway.  So, Zoe and I checked out various rides that looked like they might be possibilities for Gray.  We stopped at one ride that looked like a spinning octopus with spinning pods at the ends of the tentacles.  Gray stood at the fence and watched the ride go around while Zoe and I discussed the safety harnesses.  In the end, we both decided that it was probably too much for Gray.  We turned to move on, but Gray pulled back and started whining.  I pulled out the iPad and asked him what was wrong.  He opened up his communication app and pressed “Fun” -> “Leisure” -> “Ride Bike.”  Then, he pointed to the ride.  Zoe and I looked at each other in amazement.  There are not any amusement park choices on Gray’s iPad, so he just came up with the closest thing.

Minutes later, I was strapping him into the octopus pod.  He was genuinely happy and gave no protest when the safety bar came down over his chest and across his lap.  I asked the ride operator if there was an emergency stop switch.  He assured me that there was, but looked very uneasy that the lady with her kid strapped to a dog was asking about emergency plans.  When the ride took off, Gray was the happiest kid at the whole fair.  Zoe got him to raise his arms and squeal and he did it over and over again with each passing spin. 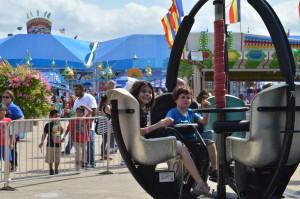 After the ride was over, we went for more fried food.  Zoe walked with her arm draped over her brother’s neck.  “I’m so proud of you, buddy!  You’re my best friend in the whole world!”  Then, she looked at me and said, “I’m so glad that Gray is just the way he is.  A normal brother would be a bratty pain-in-the-neck, but my brother is the sweetest one around.  I definitely would not trade him for any other brother.” 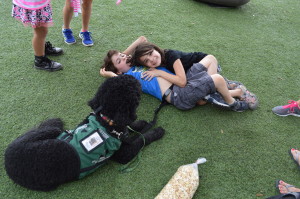