On January 13, 2014 by rhonigolden With 1 Comments - Uncategorized 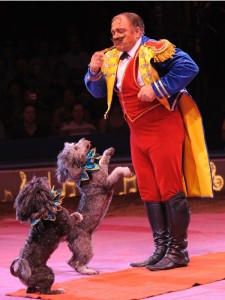 As a parent, I think it is natural to want to introduce your children to experiences that you enjoy.  I’m sure we all began parenthood with visions of sharing trips and activities with our kids.  Fathers think about playing sports together and mothers think about shopping and manicures.  Of course, that is one of the most heartbreaking parts about learning that your child has autism:  the future you envisioned just floats away.  The big things take a while to let go of.  Things like college and marriage and grandchildren are things that you really hope will somehow be possible, but, as time goes on, you start to accept that they likely are not.

The smaller day-to-day things are a little easier to accept because you just live with the status quo.  You don’t sign up for any sports teams because you know it doesn’t make sense.  You don’t sign up for swimming lessons because you think he won’t know how to follow the directions.  You stick to fast food restaurants because explaining manners and proper behavior to your child with autism is just too ridiculous to imagine.  I think that this is why so many parents of children with autism feel trapped.  I’ve often commented to Barry that I feel like we never encounter other kids like Gray outside of therapy settings.  His response is that, he believes, most parents of kids like Gray don’t take them out of the house unless it is for therapy or school or to a well-known autism-friendly location.  I hate to presume what other parents are doing, but I think he may be right.  That brings up the question: If you never take your child out into the community, how will he ever learn how to act?

Of course, I also have two other children who are typically developing little girls.  For them, my dreams of bright futures and enjoying experiences together are firmly in place.  Even before I was a mother, I knew that I would make it a top priority to teach my children to be good restaurant patrons and theatergoers.  Barry and I really enjoy live theater, and a nice meal before or afterwards just makes the event feel special.  Starting from infancy, we made a point to bring Zoe out to restaurants with us at least once every week or two.  By the time she was four, Zoe had seen a number of plays at the local children’s theater and had a good understanding of proper behavior during a show.    We have followed the same path with Lena and, I am happy to say, they are both very nice companions when the show is exciting and the menu has chicken fingers.

I guess all of the experiences with the girls over the years primed me for my mission to include Gray in our activities.  All of our successful outings with Hope have shown me that Gray wants to be included.  And, his path to learning the rules and expectations of different settings is not so different from typical children.  It just takes a little more effort.  Children, after all, need to be taught what is expected of them and often require corrections when they slip up.  For Gray, I just keep my expectations around the same level as Lena.  We talk about events before they happen with the aid of a social story and pictures on his iPad.  The first few times we go to a new event, I resign myself to the fact that I am on a business trip with goals and objectives.

This has worked pretty well over the last few months.  With Hope by his side, Gray is easier to manage and I am emboldened by our successes to strive for more.  So, when I saw that the local children’s theater was putting on a circus show, I thought it might be a perfect opportunity to introduce Gray to live theater.  Plays can be tricky.  Performers and other audience members could become alarmed if someone starts throwing a fit in the 10th row.  Children’s theaters are better, but Gray’s screams are much louder than your average toddler and I have cringed at the possibility of imposing his frustration on people who have paid a lot of money for theater tickets.  A circus show, on the other hand, sounded like a show where noisy audience members could be more easily excused. 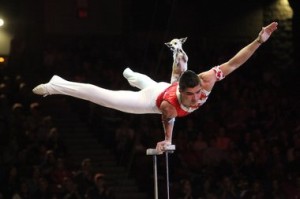 When the box office opened on the morning of the show, I called and told the house manager that my family would be bringing a service dog for my son.  I’m really glad that I did that because she was so kind and accommodating.  She told me that she would reserve some seats for us on the first row of the second section of seats.  This would allow plenty of room for Hope to lay at Gray’s feet and it would give us a quick escape route if Gray could not tolerate the performance.  Additionally, she gave me a few warnings about the show.  She told me that there would be two dog acts in the first half of the performance.  I paused for a moment and considered this.  Part of Hope’s training includes ignoring other dogs when she is wearing her service pack.  The most I have ever seen her do is pop her head up to look at other dogs.  I told her that I felt certain Hope would not bark or rush towards the stage.  She told me that wasn’t really her worry.  She was more concerned by the possibility that one of the stage dogs would see Hope and rush out into the audience.  THAT was a funny thing to consider.  In all of my ruminations over bringing Gray and Hope to the theater, I never once thought that I needed to be concerned over a stage player abandoning his role to join us in the audience.  I told her that, as soon as I saw the dog acts beginning, I would make sure Hope was tucked down flat on the floor to keep her out of view from the stage.  Finally, she told me that the end of the first act would feature a group of drummers marching down the aisle in front of us.  I thanked her for all of the information and felt better going into the theater with an idea of what to expect.

As for the actual performance, Gray did wonderfully.  Like most of our outings these days, Gray tagged along with a happy expectant look on his face.  I think that he has learned that, if all five of us are going somewhere, it’s going to be fun.  I was grateful to see that his seat was a standard chair as opposed to a flip-up theater seat.  Those can be challenging for most kids who struggle against being folded up inside; but for a kid with autism, a moveable seat pretty much guarantees nonstop movement and agitation.  Gray climbed into his chair and Hope curled up at his feet and the show was mesmerizing.  Barry and I both beamed at the peaceful look on Gray’s face when he watched the acts and enjoyed the music.  If I had to guess, I would say that his favorite act was the girl with the hula-hoops who spun them in time to soothing music under purple-blue lights.  He was motionless during that act.

The dog acts were a non-issue for Hope.  I made sure to move my feet in front of her face when they began and I’m sure she never even knew that there was a dog on the stage.  The only problem occurred when the drum line came down our aisle.  I know it startled Hope from her sleepy down-stay at Gray’s feet.  The spot light and very loud drums completely unnerved Hope.  She tried to get up and leave, but I was already wrapped around her telling her that she was safe.  I don’t think she believed me.  The drummers were marching towards us and I thought she might dislocate her shoulders to pull free of her service vest.  I wrapped my legs around her and held her close until the drummers had passed.  Hope spent the second act curled up completely beneath Gray’s chair.  She wasn’t taking any chances.

So, I guess the lesson is that everyone needs an opportunity to learn how to handle themselves out in the community.  You pick what is important to you and your family and you practice.  I’m not sure if we are quite ready for Shakespeare yet, but I hear that the Dallas Symphony is doing a kids’ series soon.  Hmmm…