On January 8, 2014 by rhonigolden With 2 Comments - Uncategorized 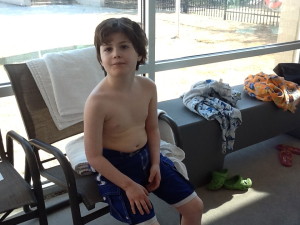 I have always dreaded Christmas Day.  I like the holiday season…the houses look festive and people are friendly and parties abound.  But, Christmas Day is usually pretty lonely feeling for me.  I guess it goes back to the pre-text message and email days when the only way to reach people was to call their house phone or show up in person.  Of course, calling or showing up at people’s houses on Christmas Day is not proper and I was taught at a young age to leave my Christian friends to their family time.  In addition, just getting out and driving around on Christmas Day has an eerie feeling of post-apocalyptic solitude. That explains the age-old Jewish tradition of going to the movies and out for Chinese food.  There is a sense of community in the crowded restaurants and theaters.

In recent years, even people who celebrate Christmas seem to have caught on to the idea of patronizing the only businesses that are open.  Text messaging even makes it possible to set plans without worry of being disruptive.  Unfortunately, until this year, our family was hit with the double dose of Christmas isolation.  Having a child with autism can be isolating on any day of the year.  But, on a dignified day like Christmas, it feels completely impossible to risk a bad scene when people’s options are so limited.

Christmas Day can feel like solitary confinement to a family whose child is prone to tantrums, maniacal laughter, aggression or generally unruly behavior.  Unfortunately, these behaviors are quite common on days where the child’s schedule has been thrown off.  Children with autism count on consistency and Gray counts on engagement from others to know what to do with himself.

About 4 years ago, we started the tradition of taking the kids to the Jewish Community Center for 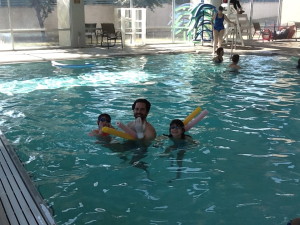 swimming in the indoor pool.  This is a great activity for burning an hour or two.  Surprisingly, there aren’t many other people who act on this idea.  We can generally count on a pretty open swimming pool with lots of room to splash around. This year was no exception. Even though Barry had stitches after he sliced his hand open while preparing a bagel for Gray, he bandaged it up and swam those kids hard. (He’s a good dad, but a terrible chef). Of course, after the swimming is done, there are still several hours to kill and hanging around the house isn’t a lot of fun when Gray is bored.

Emboldened by Gray’s new affinity for dining out with Hope at his feet, I decided that this would be the year we try to return to the Chinese restaurant scene.  Freshly showered and tired out from our swimming session, we showed up just as the restaurant was opening to ensure we got a table right away.  My parents got to the restaurant ahead of us and secured a large booth in the back.  It was the perfect set-up.  The place quickly filled with patrons and I was delighted to see many familiar families.  We had a great time.  The food was fabulous and people we knew stopped by to chat.  My kids tried foods I never thought they would.

Another family with small children sat at the table behind us.  It was amusing to see the difference between their dining experience and ours.  They had a two-year-old who kept squealing and crying and thrashing around throughout the meal.  Meanwhile, Gray sat nicely and munched on an egg roll.  My mother was so agitated with the other family that I had to laugh.  She kept asking me if there might be something wrong with the child at the other table. “Why is their normal kid behaving so badly when your autistic son is able to sit so nicely?”  Barry and I exchanged a chuckle.  We both knew that we were just one dog (and a boatload of therapy) away from having a much worse scene at our table.

Of course, my favorite part of leaving a restaurant these days is the look on people’s faces when we get up from the table and a big black dog emerges from underneath.  It’s hilarious to see the shock and hear the exclamations, “Oh my!  I didn’t know there was a DOG in the restaurant!  Isn’t that amazing!”  It is amazing.  I soaked in every step to the door that garnered a look of kindness or admiration from other diners and employees. We peacefully made our way through the crowd of hungry customers waiting at the front for a table to open.  Gray and Hope easily navigated the crowd and a smiling man held the door for us to exit.  We all stepped out into the brisk night with big smiles on our faces.  We were all so happy.  It was, indeed, a very merry Christmas! 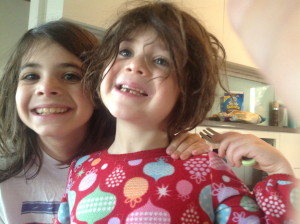 We started the day with Lena losing her first tooth. It was a good omen.