Sunshine Cleaning aka The Pooptastrophe 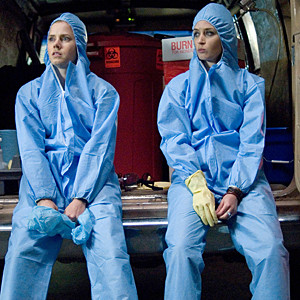 Friday night was one of those glorious nights when I made myself go to bed early, slept all night with no children waking me up and awoke at 7:30am feeling like a Disney princess after 9 hours of sleep.  I felt so calm and pleased on Saturday morning as I stretched in bed…until I heard the laughing and squeals coming out of Gray’s bedroom.  That is when my stomach dropped.

I leapt out of bed and made my way to his side of the house.  By the time I was 10 feet from his room, I knew by the cartoon-like waves of stink seeping from behind his door that there was a “pooptastrophe” on the other side.  I bravely opened the door to witness the scene that I can only liken to a bloody murder scene except with poop.  Gray was standing in the middle of the room smiling with a wild look in his eyes.  He was covered in poop along with the walls, the floor, the bed, the blinds, the toy box and the chair that sits next to his windows.  Unfortunately, this was not a unique situation.  I have had many mornings like this.  They have been happening less frequently in the last couple of months (which is probably why I allowed myself to sleep until 7:30), but here we were again.

I have told Barry before, that I think I am a lot like the characters in the movie “Sunshine Cleaning” who start a business cleaning up crime scenes. The first time I encountered a scene like this, I recoiled in horror.  I remember standing in the middle of Gray’s room, dumbfounded by idea of how I would even begin to clean up a mess like that.  By the second, third and fourth times, I had come up with a reasonable system and I remember thinking to myself, “I have a masters degree and I’m using it to be a poop scrubber!”  But, like the girls in “Sunshine Cleaning,” I have developed a system that works thoroughly and efficiently to get Gray and his room clean.  I will spare you the details here, but I am happy to share my system with anyone who might find themselves in a similar situation — either with a pooptastrophe or a bloody crime scene. 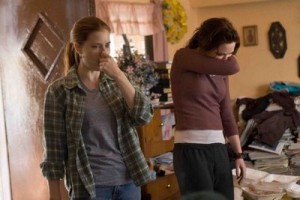 After I had Gray sequestered in the shower, I started removing items from Gray’s room to be hosed off outside. I took the chair and its cushion, the blinds off of three windows and a very unfortunate soccer ball out the front door.  I laid them out on the front lawn and I returned inside to strip Gray’s bed.  Because there were no blinds on the windows of his room, I looked out onto the street as I pulled sheets and blankets off of the bed.  I wondered why there were so many cars on our usually-quiet street.  And then I remembered.  This was the day of the neighborhood garage sale.  With the neighborhood association paying for the advertising, many households planned to have their garage sale on this day to maximize buyers.  Suddenly, I had an image of some unsuspecting buyers strolling down the street and happening upon Gray’s blinds and furniture on the front lawn.  They would walk across the driveway to take a closer look, catch a whiff of the stench wafting out of Gray’s open windows and then they would realize:  all of these garage sale items were covered in poop!  I dropped the bedding and bounded out of the house in my pajamas to grab the hose and spray everything off as quickly as possible.  Then, I tried to arrange the items close to my house to decrease the likelihood that anyone might think I was selling them.

I went back in the house, finished my clean-up, scrubbed my arms up to the elbows and started making coffee and cinnamon rolls for the family.  I even made it to yoga by 9:15…just another day on the job for my little biohazard cleaning company.