On July 3, 2013 by rhonigolden With 2 Comments - Uncategorized 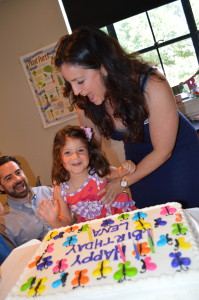 Yesterday was Lena’s birthday.  She is now officially 4-years-old.  When I look back on the last 4 years, I can hardly believe what a blessing she has been to our crazy family.  When Barry and I were first married, we always planned to have 2 children.  When I found out during my second pregnancy that I was having a boy, I felt happy and satisfied that we would have the perfect little family of 4 with a daughter and a son.  Even as I walked into the hospital to deliver Gray, I remember thinking that I would not be back again.  So, it was a big surprise when, only hours after Gray was born, I told Barry that we still had one more child to go before our family could be complete.  I remember the perplexed look on his face.  I don’t know if he took me seriously at the time.  He just said, “Perhaps you shouldn’t make any big life decisions until after we get home.”  But, deep in my heart, I knew that I had one more visit to labor and delivery on the horizon.

At that point, I was 34-years-old and I knew that I shouldn’t really wait long to have another child.  My plan was to space Gray and the next child out about the same as Gray and Zoe.  That meant that I would try to begin my next pregnancy around the time that Gray was 18-months-old.  Of course, that was the exact time that the wheels were coming off here in Casa Golden.  If you have read The Back Story, you know that Gray was diagnosed with autism when he was 19-months-old.  That means that for the 6 months leading up to the diagnosis, I had spent all of my time taking Gray to doctor appointments, therapy appointments, researching specialists and generally panicking.  I was in no position to consider having another baby.  And yet, the thought persisted.

I told Barry that I needed another year to get things stabilized, but we absolutely needed one more child.  He really thought I was crazy, but he also really liked being a father and liked the idea of sitting at the head of a table with lots of little faces turned his way.  And so, a year later, Baby #3 was on the way.  Prior to getting pregnant, we took Gray to a geneticist to test for any genetic problems that might have caused his autism and could increase the likelihood for future children.  The doctor found no genetic abnormalities (according to the technology that was available in 2008).  At that time, the rate of autism diagnosis was 1 in 150 children.  The doctor felt that, with a sibling on the spectrum, the chances of a subsequent child having autism was roughly double.  Although that sounded like a scary statistic, it did not deter me.  It was worth the risk.

I found out that I was pregnant with Baby #3 when Gray was 2 1/2 and just days before Zoe’s 5th birthday.  Barry would joke and say, “You know, no one is going to feel sorry for us anymore for having a kid with autism.  Having another kid pretty much tells the world that we must have things under control.”  I would joke and say, “Well, at least I have a good handle on what doctors to see and where to get the best therapy.  I can’t burn any bridges with Gray’s caretakers in case we need to start all over again with the new kid.”  But, I won’t lie.  It was a scary time.  When we found out that we were having a girl, I felt relieved.  Autism rates are dramatically higher in boys.  After Lena was born, I would take her to Gray’s therapy sessions and let his therapists hold her in a ploy to get free developmental evaluations.  It really wasn’t until she was about 2-years-old that I was able to fully relax and know that Lena would be just fine.

From the beginning, Lena has been an easy-going and tough little kid.  She is calm, happy and forgives easily.  She is also a natural caretaker.  From the time she started speaking in sentences, she has voiced her concern over Gray.  If she and Zoe get to do something fun, she wants to make sure that Gray is included or gets to do something that he will enjoy just as much.  It is clear that she knows he needs special consideration.  Additionally, Lena has been a “reset” button for our family.  With her arrival, our family got younger again and any frustration over Gray’s incredibly slow pace in development was eased.  Gray’s interests have been well-matched with Lena’s over the last few years and, although Lena has now surpassed him, she has been a good friend to share toys and silly tickle games and “baby rides” at amusement parks.  She has also been a good reminder of the things Gray needs to work on.  Watching her normal development in tandem with Gray’s slower pace has helped me see specific areas where Gray needs extra therapy — like playing with toys, watching cartoons, sitting in a movie theater or eating at the table with utensils.  She was also the impetus that started us on the path to medications for Gray.  Although Barry and Zoe and I were tolerant of Gray’s physical outbursts, it wasn’t until he started attacking Baby Lena in her bouncy seat on the floor that we knew we had to get his violent mood swings under control.

Yes, Lena has been a blessing in every way.  But, most importantly, she is a fabulous kid in her own right.  She is smart and friendly and compassionate.  I have no doubt that her sweet spirit will help her become an amazing adult.  For now, I will savor every moment I can with the beautiful child who has enriched our lives beyond measure. 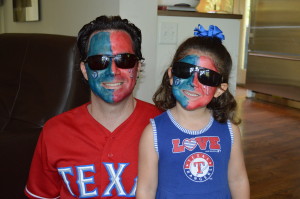