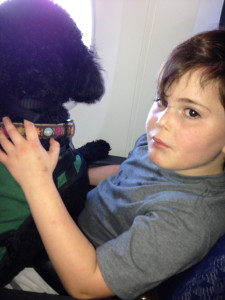 I will start off by saying that the flight from Dallas to Seattle was about what you would expect for a typical family traveling with 3 children.  It wasn’t the best flight ever, but it certainly wasn’t the worst.

It is really unbelievable…when Gray is attached to Hope, he goes where he is supposed to go without protest.  He waited nicely for us to check our bags, he was patient in the security line and sat quietly at the gate waiting for our flight.  I think that Hope truly acts as a GUIDE dog for him.  Before her, I suspect that Gray never really had an idea of where he was supposed to be.  It didn’t occur to him to look at the rest of the group and feel secure that we would guide him.  He would just run wherever his interest took him and then get upset when someone tried to stop him.  With Hope, Gray is able to relax in the knowledge that she will show him where he is supposed to be.  Even when our flight was delayed and we had to change terminals to get a new plane, Gray just happily joined us.  I can honestly say that he was the best behaved of our 3 kids for the majority of our trip. 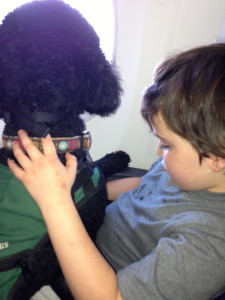 When we finally made it on our flight, it was Lena who actually caused the most trouble with her multiple requests and spills.  Hope was not thrilled to be on the plane, but, after climbing on Gray’s lap to watch take-off, she felt satisfied enough to get back down on the floor.  Gray was generally happy with a few moments of frustration.  Yes, there was the minor poop accident that made me rush to the back of the plane and ask the flight attendants to move their drink cart so we could get to the bathroom.  There was the minor freak-out in the bathroom when Gray panicked at the sound of the toilet flushing.  There was the fountain of juice that sprayed in a dark red arc over the window next to us and the row behind us so that we all looked like we had been involved in a messy murder. (Beware of those flip-top straw-style sippy cups on airplanes.  They become pressurized during takeoff!)  But, there was no hysterical screaming.  There was no self-injurious behavior.  No one was harmed en-route to Seattle.  No apologies had to be made with autism as the culprit.  We were just a regular chaotic family.

I must credit the majority of Gray’s good behavior to the immense strides he has made with his iPad.  G-d bless that beautiful multi-purpose hunk of electronics!  In contrast to last year, this year Gray has really taken ownership of his iPad.  It was so wonderful to have him request the snacks he wanted and tell me when he had to go to the bathroom.  Before, I would just have to guess (usually wrong) which snack he wanted and I would assume (apparently wrong) that his attempts to leave his seat were just attempts to escape as opposed to needing a potty break.  It was also wonderful to see him entertaining himself with the downloaded videos or looking through family pictures before he fell asleep.

Ironically, just after take-off, Gray was brilliantly using his iPad to tell me about his snack and drink preferences when the flight attendant from first class poked her head through the curtain.

“Do you have any headphones for that device?”  She was trying to sound pleasant, but she was annoyed.

“Well, you are going to have to turn that down.  It’s disturbing the other passengers.”

I was going to let it slide.  I smiled to myself thinking that she had no idea how lucky those other passengers were.  But then, Barry piped in.

“Um, that device is actually his voice.  It’s how he speaks.  Perhaps the other passengers could turn their voices down?”

She had no reply.  She simply returned to the sanctity of her first class cabin.  Sheesh!  What is it with first class flight attendants?