On August 12, 2013 by rhonigolden With 2 Comments - Uncategorized 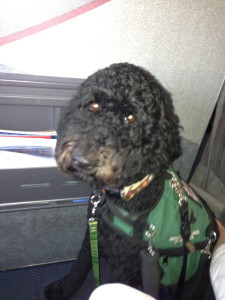 As I write this post, my heart is giddy.  I know that might sound silly for me to get so emotional over a travel day.  Most people would not be giddy at all after living this day, but I can’t help it.  Today’s flight exceeded my wildest dreams.  Through great teamwork, some luck, and a miracle dog we tackled our travel day with great ease.

Once again, I scheduled this flight for the afternoon so we could have some time to burn off some of Gray’s energy.  After breakfast, Haley took Gray and Lena to the hotel swimming pool while Barry entertained Zoe, and I packed up in peace.  We instructed her to just keep moving Gray to the center of the pool so that he had to swim non-stop.  About 90 minutes later, Haley showed up in the room with a tired boy and a cheerful girl.

We may have cut it a little too close, but we boarded the plane with plenty of snacks just as they made the final boarding call.  Hope was much more relaxed with take-off this time around.  She did not shake or try to get into the seats.  She just sat up and looked out the window.  Meanwhile, Gray calmly ate his lunch while he looked out the window.  After a few snacks and some time looking at family pictures on his iPad, Gray peacefully dozed off.  For the next two hours, I typed on my computer, took the girls to the bathroom, and chatted with Haley while Gray snoozed away with his head on the window.  I was like a regular person on a flight.  It was actually pretty pleasant and relaxing.  It killed me to know that everyone else on that plane was just taking this stuff for granted.

About an hour before landing, Lena got restless and started playing musical chairs.  She wanted to sit with me and then she decided to climb over Hope to look out of the window that was next to Gray.  Of course, this woke him up.  My heart raced a bit as I readied myself for his response.    He just bent over, ran his fingers through Hope’s fur and rested his head on the tray table.  The look on his face was purely peaceful.  I couldn’t believe how calm he was.  After a few more minutes, he took his iPad and requested a trip to the bathroom.  He walked nicely down the aisle with his hands to himself (Gray’s therapist made a nice social story about flight etiquette).  When we returned to our seats, Gray sat beautifully eating snacks and watching videos until our flight landed.

At baggage claim, a woman approached me to ask about Hope.  She said that she had a friend whose son has autism.  She wondered if Hope had made much of a difference in our lives.  I resisted the urge to laugh.  It was a legitimate question, but it seemed like such an understatement after the week we had just completed.  Instead, I gave her the website address for this blog and invited her to share it with her friend.  I mean, that is the whole point of this blog, right?  Someone sees this beautifully behaved boy and his dog and they have no idea how far we have come.  While I talked to her, I realized that I had the perfect example to share right in front of me. 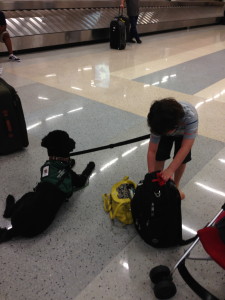 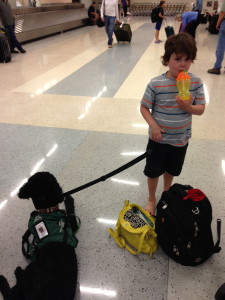 Hope lay on the floor at my feet and Gray calmly stood next to her watching the baggage carousel spin.  He did not run towards it or jump or squeal.  He just stood next to his dog and watched while Barry and the girls grabbed our luggage off of the belt.  I turned to the woman and said, “I know you will think I am exaggerating, but this right here is a miracle.  If someone would have told me a year ago that I would be standing here having a conversation with a stranger while Gray stands by my side, I would have thought that person was delusional.”  I really made a point to stop and appreciate the freedom I felt.  I was standing in baggage claim after a very long travel day with no screaming, no fighting, no panic to escape.  My hands were free and I was having a casual conversation with a stranger while we waited for our bags.

On the drive home, I just kept thinking about how much I love this family.  We may be crazy, but we are growing and getting better by leaps and bounds.  Who can say that a long travel day is almost as good as an actual vacation day?  I can.  I am blessed with the gift of contrast.  I know how far we have come, and I am thrilled.