The worst flight ever

Let me apologize to all the people who know me and saw the title of this post.  I know there are people who are thinking about me and the flight I am about to take with my family to Seattle and Portland.  I am not writing about that flight.  I intend to include that in my next post after we arrive.  Instead, I thought it would be interesting to give you readers a flashback to the worst flight our family has ever endured.  That way, when I talk about the one we are taking this week, you will have a point of reference.

The “worst flight ever” took place two years ago when we went on a family vacation to the Caribbean.  We had a 4-hour direct flight from Dallas.  Traversing the airport wasn’t too bad because both Gray and Lena were still using strollers.  Getting through security where we had to give up those strollers and walk one-at-a-time through the scanner was a bit of a problem.  It was sort of like the riddle about getting a fox, a chicken and a bag of corn from one side of a river to the other. Barry and I had to carefully sequence our times to walk through the scanner to keep Gray from making a mad dash across the airport.  In anticipation of Gray having a hard time with sitting in one place for that long, I gave him a Benadryl just before we boarded the flight.  After we got settled in our seats, Gray started to fall asleep.  Unfortunately, that is when Lena started asking for things and crawling over her brother.  This got him revved up and he spent the rest of the flight super-tired but unable to fall asleep.  In other words, Gray was miserable.  We had just started using the iPad for communication and he wasn’t really very reliable with it yet.  He didn’t see the value of using it and, therefore, had very little interest in it for communication or entertainment.  That meant that I had nothing to hold Gray’s interest other than snacks. 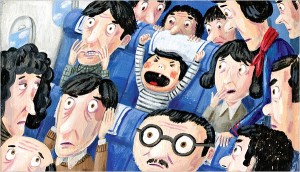 In a nutshell, Gray spent 3 of the 4 hours on the flight trying to get off.  He did not want to stay in his seat and he did not want to be on that plane.  He screamed and he flailed.  He flung himself into the aisle and grabbed onto anything he could reach as Barry and I took turns dragging him back into our row.  Our row was the first behind first class: the bulkhead row.  This was helpful because Gray could sit on the floor and Barry and I could block him with our bodies to keep him from escaping too often.  This was also unfortunate because the passengers and flight attendant in first class were very upset with the noise level that was so close to them in the steerage compartment.  The flight attendant kept pulling at the curtain that divides the two cabins as though the transparent piece of mesh could act as a sound barrier.  At one point, she poked her head through the curtain and questioned Barry:

“Can you do something to control your son?” She said this as I was literally laying on top of Gray on the floor while he writhed around beneath me.  “What exactly is he so upset about?  Does he dislike flying?”  Let me be clear.  There was no sweetness or understanding in this woman’s voice.  She was obviously just annoyed with us for being such laissez-faire parents.  She thought that it hadn’t occurred to us that his behavior was a problem.

Barry gave her a wide-eyed confused look and replied, “You know, I really have no idea how he feels about flying.  He won’t tell me because he can’t speak.  You see, he is severely autistic and likely mentally retarded so I just don’t know what his travel preferences are.” –I know, the mentally retarded statement is offensive, but Barry was going for effect.  And it worked.  The flight attendant just closed her mouth and went back behind her mesh curtain.  The man sitting next to Barry just laughed and said, “I don’t think she is going to be coming back!”

Let me say that the other passengers on the flight were incredibly kind and understanding.  No one gave us dirty looks or complained.  As I sprayed apologies across the cabin like an old lawn sprinkler that rotates clockwise across the lawn before ratcheting back to start again, the people around us tried to console me.  They were sorry that he was so unhappy and they offered many (unsuccessful) solutions.  People offered us toys, snacks, and video players.  Of course, I realize this was an act of self-preservation on their parts as much as it was an act of kindness, but I appreciated their efforts nonetheless.  At one point, I tried walking Gray down the aisle to let him move around, but that just gave him the opportunity to share his tantrum with the rest of the plane.  I guess the people at the back who were wondering what was going on at the front may have felt pleased to finally know the answer, but I suspect that their pleasure quickly wore off when Gray got to each row, grabbed the person on the aisle and screamed in his or her face.

While I stood there, in the aisle, trying to prevent Gray from assaulting people, I absolutely considered the possibility that the pilot might have to land the plane and eject us from the flight.  Mercifully, Gray fell asleep about 40 minutes before the flight landed.  We decided to stay in our seats to let the other passengers off when it was time to deplane.  I didn’t know how Gray would react when we woke him to get off the plane. I figured that the other passengers had endured enough and deserved to peacefully escape the nightmarish flight we had created.

At least half of the people who passed us on their way out said something kind or gave us sympathetic looks.  I don’t know how we did it, but Barry and I survived the flight in an amazing show of teamwork.  Our flight home was much later in the afternoon and we spent the day wearing Gray out on the beach to ensure him sleeping on the flight.

For our trip to Seattle and Portland this week, I carefully selected our flight to let Gray have a morning of activity at camp before we go to the airport.  I pray that my plans will work out.