On August 29, 2013 by rhonigolden With 2 Comments - Uncategorized 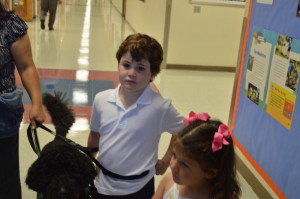 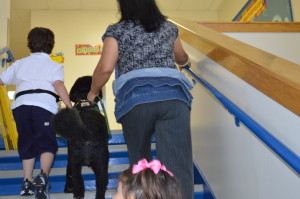 Now that school has started, it gives me a chance to reflect on our summer.  Each year, as school begins, it is only natural to look at our children and consider what is different from last year.  For Zoe and Lena, I begin each year with optimistic expectations of new skills and greater independence.  For Gray, I generally start with a healthy dose of anxiety.  This year is different, though.  This year, I am buoyed by the incredible gains Gray made over a summer that was filled with both new adventures and a casual ease in activities that used to cause us so much trouble.

May brought its usual anxieties: trying to get the school plan hammered out for fall, working out the camps so that Gray would not be idle at home, worry over his behavior at the pool, worry over his ability to cope with summer travel.  In addition, we were also fiddling with Gray’s medications to get his mood stabilized.  In our attempts to smooth out his wild swings between crazed-mania and narcolepsy, we tried 4 different medications.  Each one had its own bizarre side-effects and none of them really helped very much.  After a severe skin reaction, a huge weight gain, full-body tremors and hair-triggered irritability, I decided to take a break from medication manipulation and see what “Baseline Gray” might look like.

We started the summer with a decision to focus his behavioral therapies on good manners in public – especially at the pool.  Last year, Gray was like a wild animal at the pool.  He would fly through the entrance, attempt to jump in the pool fully clothed, swim with glee and exit the pool like a bullet with an unknown target.  Last summer, I sported a huge bruise for a couple of weeks after trying to make him wait at the table while I got everyone out of their cover-ups and ready to swim.  Gray was so enraged, he bit me in the stomach and then wailed on the ground to the horror of everyone around me.  Last summer, Gray sported numerous bruises after running up the pool steps and attempting to sprint across the pool deck only to slip and fall.  Last summer, Barry and I would have to coordinate so that one person could keep Gray swimming while the other person ordered food and had it waiting on the table lest he jump out and steal other people’s french fries.

This year, we were able to build a social story to explain how we calmly walked to the entrance, paused to gather towels, settled in at a table and waited for everyone to be ready before we walked into the pool.  This year, we practiced walking slowly when leaving the pool, using the iPad to request food and walking with the iPad to the snack bar to order burgers and fries.  Last Friday night, as the whole family enjoyed a calm meal poolside and discussed the lovely weather that graced our week, I beamed over my sweet boy who sat nicely at the table and ate his dinner.  It is truly amazing that, through the course of the summer, we have evolved to the point where going to the pool is a fun and relaxing experience for everyone. 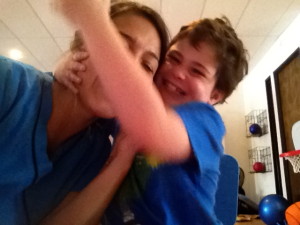 Having fun at camp 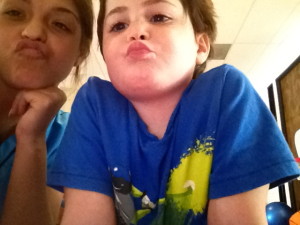 For camp, I was lucky to find a program that specializes in working with kids who are on the spectrum and use communication devices.  I feel so fortunate to live in a city where a program like that exists, but I suspect that the demand for such programs is only growing with the autism rates.  The sensory gym environment with multiple swings and trampolines at this camp helped to mitigate my guilt about having him structured and scheduled all summer long.  In reality, Gray thrives on structure and schedule and the gym was pretty much heaven for him.  I was very pleased with the staff and quality of instruction that he received there.  So, the long drive was well-worth his happiness to go and the continuation of his skill-building over the summer.  I am relieved to know that there is a place where Gray and Hope are welcome and accepted for school breaks in the future.

Of course, Hope attended camp with Gray each day.  It’s funny because the only time the camp reported “problems” with Hope were when she was forced to be separated from him during the day.  If he was on a swing, she wanted to be right next to him, not left at the edge of the gym.  If he was at the snack table, she wanted to be right under him instead of outside the door.  Her desire to be with her boy gave me comfort that a bond is growing between them.  Even though Gray doesn’t seem to notice her beyond the handle on her service pack, I know that she sees him as her responsibility and he is comforted by her presence.

I have already written about our travel successes in my posts about our trips to Seattle and Portland, but I can’t emphasize enough how liberating it feels to know I can plan future family vacations without a pit in my stomach.

Of course, the problem with developmental disabilities is that you never really know what is helping your kid the most.  If we didn’t have Gray in all of the therapies he has attended over the last 6 years, would he look the same?  I doubt it, whenever professionals spend any time with him, they always comment on how well he is doing despite the severity of his autism.  Is it just his development and age that have brought us to this new level of skills?  That is probably a part of it.  The trouble is that he doesn’t exactly show us when he is ready to move onto something new.  His therapists and I just have to keep re-introducing things (like the social stories) to gauge when he is ready for them.  Sometimes it works and sometimes it doesn’t.

The best kid at the table! 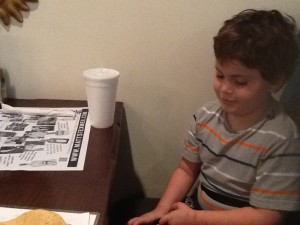 Calmly waiting for his dinner

The one thing I am sure of is that Hope has changed everything for us.  Even on his worst days, we can go out in public and eat in a restaurant and walk around kid-friendly destinations because he knows what is expected of him when he is out with his dog.  Overall, I firmly believe that Gray is calmer and more self-assured with Hope in his life.  It’s the best medicine we could have ever found.