On March 27, 2013 by rhonigolden With 3 Comments - Uncategorized 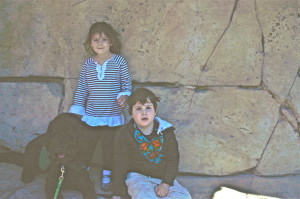 Spring break.  Family vacations, sleeping late, relaxing at home, quality time…right?  Well, historically, not so much for my family.  Any time Gray is out of school, I have typically felt dread which leads up to a near panic attack as the “break” gets closer.  You see, Gray has no leisure skills.  He doesn’t play with toys.  He doesn’t play with other kids.  He doesn’t even really play independently on playground equipment.  Staying at home is not a whole lot of fun.  Of course, going out places hasn’t been a lot of fun either.  Spring break means that all the fun places are super crowded and the person in charge of Gray has to be hyper-vigilant.

This year, I did not feel panic.  Slightly nervous, yes.  But not panicked…hopeful that things might be more fun.  So, I decided we would try some fun outings.  First stop: the zoo.

As we entered the zoo, the first thing Lena requested was a ride on the carousel.  I got in line to get the tickets and Gray started getting upset.  He whined and screamed and pulled towards the ride.  I was grateful for the tether on his waist that gave me a strap to hold onto while I tried telling him over and over, “we have to wait to buy tickets, then we can go ride.”  He didn’t seem to care for this explanation.  After we had the tickets, we had to wait again for a short while to get on the carousel.  This was painful as well. When our turn came, the ride operator looked at Hope and started stammering.  “Umm, I’m not sure if she can get on this ride.  I don’t know where she will go.”  She was a sweet girl, but there was no way she was going to stop my momentum.  I just said, “It’s fine.  She is a service dog.  She will be fine.” Gray and Hope and I climbed up on the carousel and he climbed up on a horse.  Then, he climbed down.  More whining. I directed us over to a stationary bench and he settled in with Hope at our feet. When the ride started, he got a big smile on his face.  A big lovely smile.

After the carousel, we spent over 2 hours walking around the park and stopping for a leisurely lunch.  Gray didn’t have much interest in the animals, but he seemed content to walk around and take in the surroundings.  His favorite part was the water features.  We had to stop and look at every waterfall, stream, lake and penguin tank. At first, I urged him to move along so we could see the big animals and the other “good stuff.”  Then, I realized, this was his good stuff.  If he was being good and patient with everyone else looking at the animals, then we owed it to him to be good and patient while he admired the water. I’m sure that the people who design the water features would be very happy to know that they are being appreciated!

On the way out, Lena begged to go on the carousel again.  I flinched.  We had experienced such success, I wanted to end on a happy note.  The line at the carousel was twice as long as it had been when we entered the park.  I had to decide: whose meltdown would be harder to tolerate?  Gray in the line, or Lena begging and wailing all the way home? As we got closer to the ride, I remembered that the whole purpose of this trip was to let Gray practice good behavior out in the community.  If I ever wanted him to learn how to wait in line, how could I expect that to happen without lots of practice?  We headed over to the carousel.

This time, Gray just whined while we were in line, but he did not drop to the ground.  When we went towards the carousel, Gray tried to run up to the front of the line, but I directed him to grab the handle on Hope’s pack because we needed to wait our turn.  He calmly followed to the back of the line.  Then, he waited patiently while he watched the carousel go around.  When our turn came up, he scrambled up onto a horse and did not get down.

Everyone left the zoo with big smiles…especially me.