Halloween: Past and Future

On April 22, 2013 by rhonigolden With 0 Comments - Uncategorized 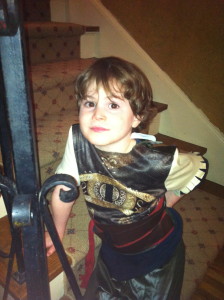 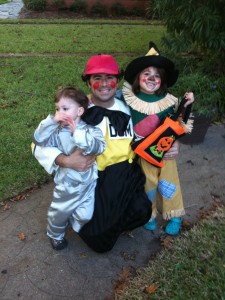 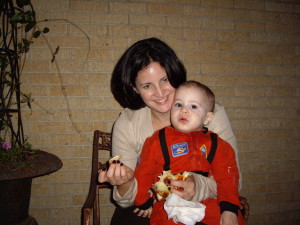 Why am I writing about Halloween in April?  Well, I have had some people ask me what life was like for Gray and our family before Hope.  I am accustomed to rattling off a list of things that can and do happen when we have been out in the community, but it occurred to me that Halloween would be a perfect example of the progression we have made and where I hope to go.

Halloween is a BIG holiday in our neighborhood.  The decorations on the houses around here rival Christmas and sometimes even surpass them.  Trick-or-treating is one of the most anticipated events of the year and we always celebrate at a friend’s house whose street gets a lot of traffic.  She orders pizza, we all take turns passing out candy and taking kids to the houses.  Someone usually throws up from too many sweets: it’s a memorable event.  Through the age of 4, we always just took Gray along in a stroller while Zoe ran up to the houses.  He enjoyed being out, as long as we kept moving.  He usually ended up falling asleep in the stroller after we parked it next to us on the porch and passed out candy.

Two years ago, I decided to give Gray a shot at trick-or-treating.  The class at his pre-school program had been practicing it and I wanted to see how it would go.  At first, Gray was happy and intrigued.  We walked hand-in-hand along side Zoe who was thrilled to have her brother along.  She patiently walked at his pace and escorted him up to the first house.  She explained to the people at the door that he could not speak, but he loved candy. (Side note- Gray does not like candy. As sweet as Zoe’s intentions were, she absolutely seized on the opportunity to double her candy intake.) I helped Gray to open his bag and he marveled when strangers dropped things inside.  We had a similar experience for 2 more houses.  Then, Zoe grew impatient with our painfully slow progress.  She started running ahead. Gray continued to be content just walking with me and looking at all the people for about 10 more minutes.  Then, he started getting upset and struggling to have me release the grip I had on his hand.  He was tired of holding hands and he wanted to be free.  As soon as I loosened my grip, he pulled free and started bolting across lawns.  In the dwindling light, I struggled to find him and imagined him just disappearing into the crowd.  It was reminiscient of the scene in E.T. where Elliot can’t find his alien friend because the streets are filled with small people in costume.  When I finally caught him, he dropped to the ground in full-on meltdown.  I had squashed his goals (goals that no one could know) and now he had to endure me holding onto him again.  As I threw his kicking and screaming body over my shoulder, I found Zoe and told her that we needed to head back. 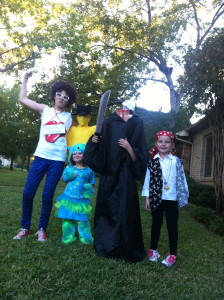 Last year was the first year that Gray was really proficient on his iPad.  One of his amazing therapists agreed to come along with us and practice using his new communication skills.  The iPad was loaded with all the necessary Halloween phrases and we ran dry-runs in his classroom and around the house.  On Halloween evening, we loaded up and headed over to our friend’s house.  Unlike in years past, she decided to go with fried chicken for dinner.  Otherwise, everything was just as it had been every year.  Gray burst into the house with great expectation.  Then, he started whining.  When we pulled out his iPad, he just kept pressing “pizza.”  This is notable because, as I have mentioned before, only very close friends invite us to their houses.  This is a house that we visit quite often, throughout the year, with and without various meals included.  It was interesting to me to know that Gray had observed the cues to know that this was Halloween and he could expect pizza.  Unfortunately, there was no pizza to be had, so Gray was pissed.

After we weathered the storm of his disappointment, we headed out for an early before-sunset trick-or-treat session.  I learned my lesson about going out with him in the dark.  Because we were so early, we were among the first to hit the houses and Gray had plenty of time to practice his Halloween phrases for his new audience.  People were amazed and encouraging.  Everyone whose house we approached waited patiently for Gray to use his iPad and then they poured extra helpings of candy in his bag.  Zoe was thrilled.  Gray looked very proud.  Things were going very well…until we hit house #5.  As we approached this house, I could see that the owners were sitting on their porch with a bucket of candy.  When Gray started running towards them at full speed, I felt optimistic that he was getting the hang of this.  That is until I saw what he saw: The owners were enjoying a pizza outside while they waited for the kids to arrive.  I broke into a full sprint and cut Gray off just before his grimy little hand landed in the middle of their dinner.  Gray dropped to the ground and had a full-on fit right their on the porch of house #5.  The owners became flustered and tried to comfort him with candy and compliments on his costume, but Gray was not to be comforted.  As his therapist and I dragged him back towards my friend’s house, I tried to console myself with the little bit of success that came before the fall.

Just 50 feet from our destination, Gray pulled himself together and broke away from us again.  The people across the street were having a little party on their front lawn and there was a stack of pizza boxes set up on a buffet table.  Fortunately, we know these people from our swimming club and they know Gray.  As he ran toward their front porch, the dad said, “Hi, Gray!  Want some candy?”  I explained that he would gladly trade all of his candy for a slice of their pizza.  He said, “No problem, he can trick or treat for pizza!”  As his therapist and I caught up to Gray, we thrust the iPad into his hand and asked him what he needed to do.  He whined, but went through the motions of pushing his Halloween buttons.  The dad was so impressed, he loaded up a paper plate with 3 slices and handed them to Gray.

We made our way across the street and Gray sat nicely at the table enjoying his well-earned pizza.  It wasn’t quite the success I had hoped for, but it was a definite step up from the year before.  At least this year, with the help of his new communication device, I knew what Gray’s goal were.

Of course, we haven’t had a Halloween with Hope yet, but I am already brainstorming dog/boy duo costumes!