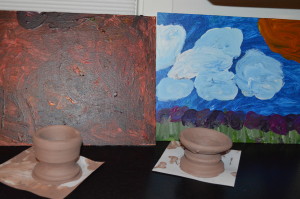 On Saturday, Barry and I took the kids to an art festival that we have enjoyed many times over the last several years.  The weather was beautiful and I knew we had to get out of the house because Gray was trying to fling open every door and would throw himself to the ground in an angry crying heap each time he discovered the doors were all locked.  We had not been to this festival since Gray outgrew his stroller and I was curious to see what new artists might have popped up in our absence.  Zoe and Lena were fired up because the kids’ area promised to have some exciting projects.  Barry was nervous, but agreed to go under the premise that I promised to buy an extra-large bag of kettle corn.

As we descended on the festival, we split up in the traditional manner: Barry took the girls and I commandeered Gray and Hope.  At first, I tried to join Barry in the kids’ area to see if Gray might be interested in any of the activities.  When he started grabbing at other people’s food, I knew we needed to move along.  We walked over to the kettle corn cart and purchased a very large bag.  Gray was excited and kept saying “pa pa pa” as we strolled back to find Barry and the girls.  We shared our kettle corn as the girls finished up painting their canvases and went to check on their spots on the pottery wait list.  I felt very relaxed with Gray and Hope close by my side when, suddenly, I felt a strong pull on Hope’s tether.  I was bewildered and looked around to see what kind of large fish I had hooked on my line.  In the crowd of kids, I could not see Gray and I could not imagine where he had gone.  Just like a fisherman, I walked my hands down the tether line until I found him at the end.  He was standing at the pottery table eating clay.  I gave Hope a good pat and said a silent “thank you” prayer.  Without her, I would have felt panicked in my inability to find Gray.  With her, his retrieval was just a simple fishing expedition.  I peeled the clay out of his mouth and we left the kids’ area to walk around in less interactive areas.

We walked up and down the aisles looking at the booths of the various artists.  Of course, there was no stopping or shopping, but I reminded myself that that my two typical kids would not allow me to stop or shop either.  The difference is that while my typical kids would just whine and complain, Gray would protest by dropping to the ground and wailing.  Either way, I set my expectations for a quick tour of the festival and I considered all of the money I saved by being denied a thorough inspection of all the booths.

Gray seemed to be enjoying himself as we maneuvered through the crowd.  There were lots of sights, sounds and smells.  Then, he started enjoying himself a little too much.  As he started jumping and increased his walking pace, I felt nervous that mania was about to rear its ugly head.  Within moments of me having that thought, a person who passed us let out a yelp.  I immediately looked at Gray and considered the look of glee on his face.  His left hand (the one that does not hold Hope’s handle) was up and ready to pinch any poor soul who might wander too close.  I struggled to correct him, but I won’t lie: many people were pinched that day.  I made a quick turn and started guiding Hope and Gray back to the kids area so that Barry and I could make a plan.  On the way, there was a bench where an older man was sitting peacefully.  Gray sat down next to him and let out a sigh to show that he was getting tired.  He then draped his arm over the man’s lap and leaned into him.  “Sorry about that.  We are not really good with boundaries,” I explained.  The man couldn’t have been nicer and told me that he was happy to have such friendly company.  Gray looked very calm, so I let my guard down and sat on his other side.  The man asked me about Hope and commented on how pretty she was.  Gray stroked the man’s leg and I started apologizing again.  The man just looked down at Gray and said, “He’s fine!  He’s not doing any harm.”  In that moment, Gray and I both made the same realization: that man was wearing glasses.  My stomach dropped.  With lightening speed, Gray had ripped the glasses off of his bench-mate’s face letting out a squeal of laughter.  I quickly unwound his fingers from the glasses and gave them back to the man with deep apologies.  We got up to go and that sweet man just laughed and told us to enjoy our day.

It’s unfair really: One of the reasons that ASDA uses labradors, golden retrievers and doodle mixes is because these are friendly-looking breeds.  The idea is to attract other people and kids to interact with a child they might otherwise have avoided.  This is supposed to encourage socialization and help children with autism get comfortable interacting with others.  Instead, Gray uses it as a web to trap his next victim.  I am grateful for the kind people who pretend to understand when my clearly disabled and adorable 7-year-old causes harm, but I know we must get this problem fixed soon.  I fear that, by the time Gray is a teenager, he will be far less adorable and downright formidable.

I think I will pour another glass of wine while I ponder that dilemma.