On March 29, 2013 by rhonigolden With 1 Comments - Uncategorized 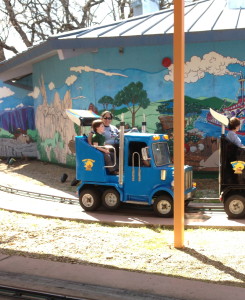 The zoo went so well, I decided that we were ready for the big leagues.  This morning, I decided that we were going to try Six Flags Over Texas!  Because Gray is such a sensory seeker, I knew he would love the rides if I could just keep him from melting down or running away.  In anticipation of Hope’s arrival, I bought memberships or season passes to several points of interest around town.  I figured that would take the pressure off if we had a rough trip or wanted to end early to keep things from heading south.  With a season pass, I don’t feel pressured to get the most out of my expensive ticket, I can just say, “That’s enough for today, we will try this again soon.”

This week is the perfect week to try these adventures because Gray and Lena are on spring break, but Zoe is not.  Of course, Zoe is fun to be around and she tries to be understanding of the limitations that surround her brother, but I knew that her normal 9-year-old needs would NOT be met on any of the outings we were taking with Gray this week.  On the other hand, Lena is the perfect companion for Gray.  She has a similar activity tolerance and energy level.  Also, she is blissfully ignorant to anything that we might be “missing” by going on limited rides or leaving early.  I have often thought, “Thank goodness for Lena.”  She is an anchor that keeps me from feeling held back by Gray.  Without her, I would constantly be mourning the lack of “big kid” stuff that we couldn’t do with Zoe.  I would blame it on her brother and, I fear, she would blame it on her brother as well.  With Lena, we are brought back to the activities and tolerance of a normal 3-year-old level (which is a level much more suitable to Gray).  That way, any big kid stuff that Zoe misses can be blamed on her little sister.  That seems healthier to me!

As we made our way into Six Flags, it was apparent that this was a crazy week to come.  Beautiful weather and city-wide spring break equals unbelievable crowds.  I took comfort in the fact that Six Flags has a policy of issuing a wristband to guests with disabilities that allows entrance to the rides through the exits, thereby avoiding waiting in line.  Unfortunately, we had to go to guest services to get that wrist band and the line there was very long.  Added to that problem was the fact that Gray spotted a poster advertising burgers and fries by the entrance. Once he saw that, he was set on eating lunch.  He kept hitting “burger” on his iPad and wailing as I looked for a manager at guest services to plead my case.

I made my way through the crowd and found a manager who was directing guests.  I asked her how we could quickly get our wristband.  She told me that we would have to wait in the line among other guests with varying needs including those with other disabilities.  Although I am not regularly a person who tries to cut in line, I tried explaining to her that my son’s disability is that HE CANNOT WAIT IN LINE! She actually tried arguing with me about being fair to the other guests while he screamed and fell on the ground and grabbed other people in line. When a person ahead of us in line offered to let us go ahead of her, the manager finally relented and took us to the back door to get our wristband. I thanked her profusely and she gave me her direct number so we could give advance warning before our next visit.  –Good idea, Six Flags!  Let your autistic guests call ahead so they can just do a quick pick up instead of waiting behind people who want to pick up coupon books.  That way, we don’t have to suffer the meltdown and the other guests don’t get assaulted by a crazy kid who is attached to a dog.

After we got that task conquered, we needed to immediately search for that burger and fries.  Once I made it clear to Gray that we were making that a priority, he calmed down and walked nicely holding Hope’s handle.  Let me re-emphasize, the park was PACKED with people.  We had to weave our way through the crowd to find a place to get Gray’s specific lunch request.  I marveled at how nicely he moved with us.  His head swiveled around as he took in all of the sights, sounds, and smells.  Without Hope, he would have been too overwhelmed by all of the manhandling I would have had to do to get him safely through the crowd.  He would have dropped to the ground or run away.  With the tether, Gray and I both felt relaxed and safe to just take it all in.  As far as I was concerned, we had already made the trip a huge success.  To walk through that many people with that much stimulation and have no problems was truly amazing.

After we secured some french fries, the rest of the trip went very smoothly.  Gray and Lena enjoyed the kiddie rides, and Lena especially enjoyed riding with her brother.  The lack of waiting in line allowed us to move efficiently from one ride to the next and we left 2 hours later feeling like we had enjoyed a full day.  It was perfect.  This marks the first of Gray’s school breaks where I have enjoyed the time together instead of dreading what I would do with him all week.  Watch out world, we’ve got a new lease on life.