Gray and Hope at school

On March 15, 2013 by rhonigolden With 5 Comments - Uncategorized 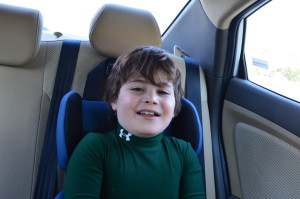 So here is the part that I would guess people are most interested in reading about: how are Hope and Gray getting along now that the training period is officially over?

Kati’s departure means Gray started going to school with Hope and neither Kati or I were there to buffer the interactions.  I felt very nervous about how the first day would go with Gray and Hope “on their own.”  Of course, Gray’s teacher is very bright and felt good about the training she received, but still, she has a class to teach and goals of her own to accomplish.  It was time for Hope to finally do the job that she has trained for the last 2 years.

I was relieved around 11:30am when I received a text from Gray’s teacher letting me know that she and Hope had bonded on the playground and she felt sure that Hope had averted a tantrum.  When she called me later to explain, the story made my heart swell.  Gray, Hope and Gray’s teacher (Kendra) were out on the playground.  Gray climbed up a jungle gym with a slide.  First, Kendra said that Hope stood on her hind legs and pushed Gray in the bottom with her nose as he climbed the ladder.  Then, Kendra and Hope waited for to come back down.  Kendra was surprised when she saw Gray go down the other side and start running away.  She grabbed Hope’s leash and the two of them took off for Gray.  Kendra said that she felt very much like she and Hope were a team on a mission.  As soon as they got in arm’s reach of Gray, Kendra snapped the tether on his belt.  This got him upset and he sat down while making that whine-scream that usually indicates a tantrum is coming.  Kendra said that Hope went over to Gray and started sniffing him all over.  This prompted some wiggling and laughter from Gray.  Then, she put her head in his lap.  Kendra said that Gray just blinked and looked at her as if to say, “What was I mad about again?”  Tantrum averted.  Everyone returned to the classroom in a nice orderly fashion.

This would be a shining example of what I prayed Hope could do.  I just didn’t think it would happen so quickly.

Video of Gray at school