On March 6, 2013 by rhonigolden With 7 Comments - Uncategorized 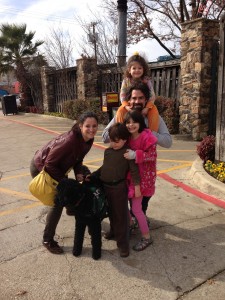 Zoe said, “I can’t believe it! We are all out at breakfast! Someone take a picture.”

We started out our morning with a family breakfast at one of our favorite restaurants.  We used to go there more frequently when Gray could be strapped into a high chair, but after he got too big for that, it became more and more difficult to manage him in a real (non-fast food) restaurant.  I am proud to say that it only took 4 adults and a highly trained service dog to accomplish a civilized normal-looking meal with my 3 kids.  Seriously, people who have neuro-typical kids or no kids at all should really appreciate the regular things that they can do without it being a big deal.  We require an entourage to just go out for breakfast.

After a lovely and successful breakfast, we went to the Arboretum.  Barry offered to take on the handler roll while we were there.  It was incredible.  Gray really enjoyed walking around and looking at everything without being restrained by a stroller or grown-ups tightly gripping his hands.  Of course, I was so wrapped up in the details of every possible scenario (was the leash too tight, was the tether pulling on the dog too much, what would we do if he dropped to the ground?) that I missed the big picture.  Barry was the first to say how impressed he was at Gray’s ability to just walk with us along the paths.  He said several times, “Could you ever imagine him coming here with us without a stroller?  This is incredible!”

One thing that was very surprising to me was Gray’s lack of endurance.  Gray is a VERY active kid.  He is constantly jumping and spinning and throwing things, so I assumed that he had good endurance.  I was mistaken.  Those activities are all short-burst actions.  After walking at the arboretum for about 15-20 minutes, Gray got very tired.  He kept trying to sit on Hope or lay across her body or ride her like a horse.  When those things didn’t work, he started walking like a little old man – bent at the waist and dragging his feet each step.  The interesting thing is that he did not throw a fit or ask to be picked up.  He plodded along and was grateful when we stopped to sit on a bench.  This was another first.  Gray doesn’t sit on benches.  Gray rarely sits anywhere for a long period of time.  Sitting is a skill that we have worked on quite a bit in his behavioral therapy.  The fact that the walking made him tired enough to volitionally sit was very encouraging.  It just seemed so “normal.”

Another thing that struck me at the arboretum was Gray’s willingness to walk nicely with us.  In the past, Gray would just run randomly in some direction that would send one of us chasing after him.  Kati mentioned that there are some people who theorize that people with autism do not understand how to follow a path.  Whereas a typical person would see a sidewalk outside or a walkway in a mall, people with autism do not see the distinction between “on the path” and “off the path.”  That is an interesting idea that would explain Gray’s tendency to just head off from the group without considering the appropriate places to go.  With Hope, he is shown the path.  With Hope, he can peacefully take in his environment in an organized “on the path” manner.

It makes me think about my days as a wheelchair specialist.  I used to raise eyebrows when I would suggest putting people with brain injuries in power wheelchairs.  Many therapists and family members would be worried that a person with cognitive deficits or poor spatial awareness or problems with aggression would be dangerous in a motorized wheelchair.  My thought was that, perhaps some of those issues could be corrected simply by letting the person be responsible and capable of moving in their own environment.  How can you expect a person to pay attention to his environment if he has always had someone else navigating?  How could a person develop spatial awareness if they never felt responsible for consequences that might occur if they were inattentive?  Likewise, a reasonable person might turn aggressive if he was never allowed to explore his environment and felt imprisoned by his caretakers.

I am stunned by the similarities with Gray.  If every outing we take with him results in him running off and someone chasing after him to drag him back, that is frustrating for everyone involved.  Gray is mad because he didn’t get to go where he wanted and the caretaker is mad because her heart is pounding out of her chest.  With Hope, Gray must take the time to think about where he wants to go and communicate that in an appropriate way.  The journey feels calm and happy.  He stays focused on his environment.  Learning occurs.

By the time we took our third outing of the day back to the mall, Barry and I could see this was true.  We are both very optimistic that big changes are on the horizon for Mr. G.

Video of going to breakfast and walking at the arboretum