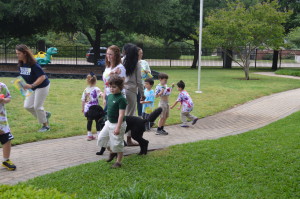 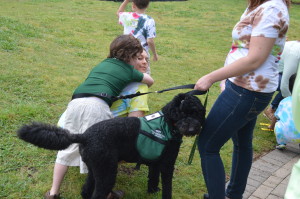 As a kid, I remember looking forward to field day all year.  The games, the popsicles and the prospects of winning ribbons at school were almost too exciting to bear.  Last Friday, was field day at Gray’s school.  I showed up with my camera ready and an uncertain feeling as to 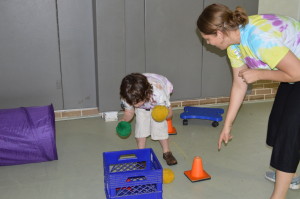 how the day would unfold.  I had visions of potato sack races with Hope stuffed into the bottom of a potato sack or Hope being made to run across a field with an egg on her back while the other kids ran with their eggs in a spoon.  I also had visions of Gray just laying in the grass crying because he was overwhelmed with the whole thing.

As I have mentioned before, Gray attends a school for kids with learning differences.  I can’t comment on what the kids’ differences or diagnoses may be, but I know they are all much higher functioning than my kid.  A day like field day really highlighted to me how different Gray’s needs are from the other kids at the school.  For them, a special day is fun and exciting in a good way.  For Gray, a special day is confusing and exciting in a bad way.

On a typical day, Gray has learned what to expect as far as activities and scheduling go.  He has also learned what is expected of him in each of his daily activities.  On a special day, all bets are off.  On Field Day, Gray did not know what he was supposed to be doing.  For short stretches, he could engage in an activity like the obstacle course or the horseshoe toss; but in the wait before and after his turn, he did not know why he was waiting or what would come next.  This resulted in him alternating between tantrum and manic crazy violent happiness.  Another confusing notion to him was having his mom at school.  I think that my presence totally threw him off.  He kept asking me to go “bye bye,” and would either pull at me in tears so we could leave or he would squeal and jump and slap me in excitement.

Unfortunately, that was only the first of 3 special Fridays during the month of May.  This Friday is Grandparent’s Day.  Although I feel a little guilty about throwing a bucket of cold water on all the plans that go into a special day, I think I need to limit “special” for Gray.  As I imagine Grandparent’s Day going, Gray would be doubly thrown off and excited to see my parents at his school.  Any plans that the teacher might have for showing Gray’s grandparents the kind of work he has been doing would go to waste as the day would be spent trying to calm him down and protect everyone around him from the happy-excited pinches, hair pulls, and slaps that he would undoubtedly deliver.

I know that “special” days are inevitable.  There are holidays and vacations every season.  And I dread those days.  Kids like Gray just do best when life is as predictable as possible.  So, I will push aside my guilt over denying my son the possibility of a truly memorable moment in favor of keeping things as routine and calm as possible.  I will hope that the teachers and administrators will understand my position and not feel too disappointed that my kid won’t participate in the special activities that they have planned.  Tomorrow, I will send him to school like it is a regular day.  I won’t tell my parents that they could have come because I know that everyone would go to a lot of trouble only to be let down by the fact that the only thing “special” they would witness is Gray’s very erratic behavior.  I will pray that, without his own grandparents present, Gray will not notice the other grandparents and be able to participate in his school day just like he does on every other regular day.