On August 7, 2013 by rhonigolden With 2 Comments - Uncategorized

Kati’s parents live in a house on a river just south of Portland.  One evening, after camp, they invited us along with another family and some of the puppy raisers to come for a boat ride.  It sounded like a fun evening, but I was a bit apprehensive about taking Gray out on a boat.  Coming from Texas, we have lots of friends who go boating on the various lakes around the state, but the unpredictable nature of Gray in new (and possibly dangerous) situations has always prevented me from accepting an invitation.  In addition, with Hope added into the mix, I have felt even more uncertain about how she would fit into the boating experience.  Of course, I knew that if I ever wanted to try out the whole “boat trip with the family” thing, there was no safer place to do it than with Kati.

When we arrived at their house, it was a relief to be met with so many friendly and helpful people.  Even with close friends, I have to take on the entire Gray-Hope unit because no one else really knows what to do with them.  This is generally not a problem for me since Barry takes the girls and we have our system down.  But, in Portland, everyone we we had contact with felt equally comfortable with Gray and Hope.  I barely got everyone out of the car before people showed up to take Gray and Hope inside to get ready.  It was so luxurious to change into my bathing suit in a room by myself!  By the time I got down to the dock, Kati’s parents had already chosen a life vest for Gray and Kati was putting it on him.  To my surprise, he did not protest at all about the tight fit or bulky vest. 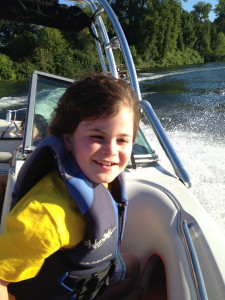 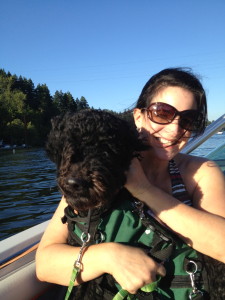 I put vests on Lena and Zoe, and we all loaded onto the boat: Kati’s parents, Kati, 2 of the puppy raisers, Haley, Barry, Zoe, Gray, Lena, me AND Hope.  Yes.  Hope came along on the boat.  It was actually my request because I figured that, if this went well, and we could secure another invitation for a boat ride back home, I needed to be prepared to bring Hope along.  Kati said that she hadn’t brought one of the service dogs on the boat before, but she felt confident that it would be fine.

Gray was thrilled to get on the boat and immediately scrambled to the front to take his seat for the ride.  He squealed a little when the engine started and we pulled away from the dock.  We moved to the center of the river and Kati’s father threw out a 3-seat inner tube to pull behind the boat.  Three of the riders climbed onto the tube and away we went.  I held onto Hope and Gray sat next to Kati at the front.  As soon as we picked up speed and started making turns, Gray sat 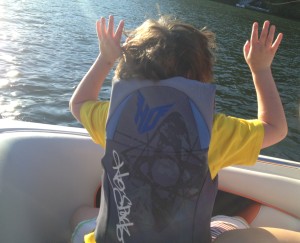 up on his knees and craned his neck up to catch a face-full of wind and water spray.  He was smiling from ear-to-ear and raised his hands up in the air like Leonardo DiCaprio in Titanic.  I really did not know what to expect from him, but it was clear that he was in heaven.

After a couple of riders took turns on the inner tube, Kati said, “I’m going to take Gray!”  Of course, Lena immediately asked if she could join.  That made me nervous.  How could Kati protect Lena if Gray got out of control?  How could Kati manage Gray if Lena fell off?  Kati’s father assured me that he would take it slow and easy and, before I knew it, Gray was climbing onto the tube with Kati.  I handed Lena over the back of the boat and waited to see how everyone would react when the line grew taut and the boat took off.  I’ve never seen a look quite like the one I saw on Gray’s face.  I’m sorry that I didn’t have my good camera on that boat with me to catch a close-up.  I can only describe his expression as what you might see on a person who rubbed a bottle and watched a genie spring out.  He looked surprised and ecstatic and incredulous.  I think it may have been the most exhilarating experience that kid had ever felt. With Kati’s hands across their laps, both Gray and Lena did not move an inch during their ride.

They both just laughed and laughed at the speed and the water spraying up into their faces.

I sat at the back of the boat with a perma-grin on my face and tears streaming down my cheeks.  I told the other girls that I felt so lucky to be able to give Gray an experience like this.  I am sure that there are few other kids with impairments like Gray’s who get to ride on inner tubes behind a speed boat.  There was nowhere else in the world I would have tried this without having to swallow my fear.  Even Hope joined in on the fun when she jumped from the doc into the river to swim with one of the other dogs.  Here on this river outside of Portland, I just knew that the situation would be under control.  I am a brave mom, but Kati makes me more brave.  And, we all benefit from a bit of bravery…especially on a day like this one. 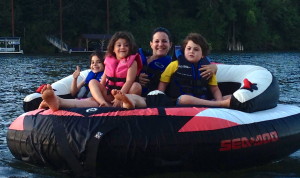