A simple trip to the park

On March 25, 2013 by rhonigolden With 2 Comments - Uncategorized 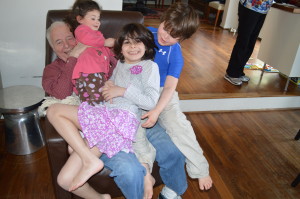 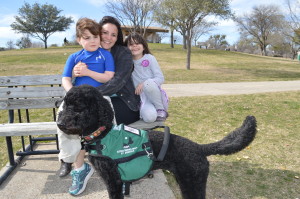 On Sundays, my parents usually come over and spend time with us.  They love the kids and Gray especially loves my dad.  They have had a very strong bond since Gray was an infant.  This weekend, they came over a little earlier than usual because they wanted to see Hope and Gray in action.  We decided to go to the park.

It was a beautiful day and everyone felt happy to be outside.  The girls had a great time on the playground and managed to talk their grandfather into buying them treats when the ice cream truck came around.

Gray loves the park, too.  I think he loves the high-energy environment and the sensory input he receives there.  Because he is such an elopement risk, we generally just head straight to the swings and stay there for the entire trip.  That way, I can keep an eye on the girls while they play on the different pieces of equipment and I don’t have to keep worrying about Gray running off to something dangerous.  He is happy on the swing and can easily stay there for over an hour, so it generally works out.  The only problem that can arise is when the swings are all full and we have to wait for a turn.

But, this time I wanted to show my parents how Hope and Gray explore together, so we did not hit the swings right away.  Instead, we walked up a large hill to get to the park, then we sat on a bench for a few minutes, then we walked down to the path by the lake and, finally, we made our way up towards the swings.  I never would have been willing to take that stroll without Hope by Gray’s side.  I would have been too nervous that he would try and jump in the lake or run to the parking lot or grab another kid by the hair.

This time, our stroll went smoothly.  But that’s not all.  This time, Gray played on lots of different kinds of equipment.  This time Gray walked along the concrete retaining wall on the edge of the playground like it was a balance beam.  This time, Gray took a few breaks and just sat on a bench to look around.  When I tried to think back on all of the surprisingly “normal kid” things that he did, I tried to think about why I never saw him attempt those things before. 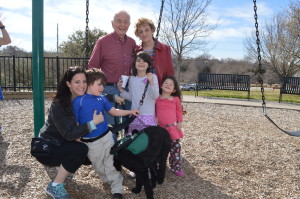